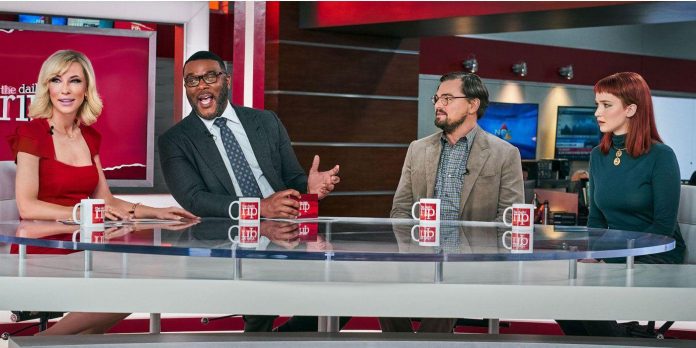 The angry interview shown in “Don’t Look Up” strangely reflects the clumsy broadcast of real-life news. Written and directed by Adam McKay after the success of his other films such as The Big Short and Vice, “Don’t Look Up” appeared on Netflix late last year and received mixed reviews. The film stars Leonardo DiCaprio and Jennifer Lawrence as two astronomers who embark on a nationwide media tour to warn of a huge asteroid approaching Earth.

“Don’t Look Up” is a clear satire of humanity’s attempts to cope with the climate crisis, when Randall Mindy, played by DiCaprio, and Kate Dibiaski, played by Lawrence, are struggling to get the American government to respond properly to the impending threat. As part of his media tour Mindy and Dibiaski are guest stars of the morning talk show hosted by Bree Evanti (Cate Blanchett) and Jack Bremmer (Tyler Perry). As with the rest of their “Don’t Look Up” efforts, Mindy and Dibiaski’s warnings are largely ignored, with the hosts explaining that they prefer to talk only about happy news. Then Dibiaski gets angry and starts yelling at the hosts on the air.

This angry Don’t Look Up interview is strikingly similar to a recent interaction on a real English news channel in the midst of a record heat wave in the country. A short clip edited and posted on Twitter by Janis Latsis shows Dibiaski’s outburst, followed by an excerpt from a real meteorologist warning that the British heatwave will be “brutal” and will lead to a number of heat-related deaths. Then one of the hosts interrupts the meteorologist, explaining that she would prefer the show to be “happy with the weather,” teasing that meteorologists are “harbingers of doom.”

Although the stakes in “Don’t Look Up” are clearly higher than in a British news clip, it’s not hard to see the similarities between a fictional scene and a real interaction on British television. The owners in both cases intend to please the bad news, even when it is almost impossible to find solace. As with Dibiaski’s outburst after Bree and Jack refused to heed her warning, the meteorologist maintains his serious tone, doubling down on his warning that the heatwave will have serious consequences.

Much of the controversy surrounding “Don’t Look Up” seems unrelated to the film’s obvious message about climate activism, and many viewers instead criticize the film’s despotic approach to that message. Despite the fact that some of the satirical elements of “Don’t Look Up” lack subtlety for some viewers, it’s interesting to see how one of the film’s moments so clearly predicts real interaction on a climate-related issue.

Why Morpheus and Trinity look different in the Neo modal matrix

Google Chrome will speed up your searches on mobile with its...