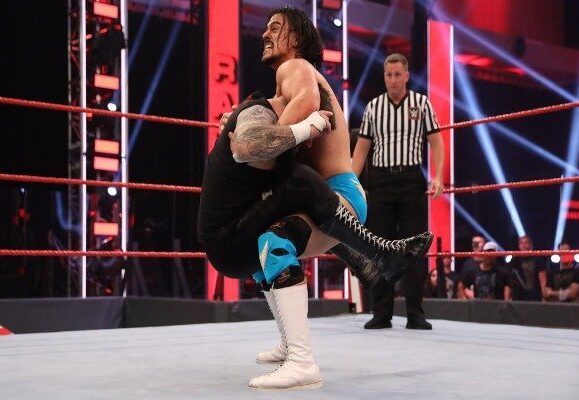 This week, at the red mark, we have been able to observe how each Triple A fighter took a different course. Andrade lost his title in the hands of Apollo, and what he ended up paying with everything he found on his way. Theory was beginning to triumph with the Messiah and Angel Garza had a match with Kevin Owens.

Along with Zelina, he had a great opportunity, to demonstrate, because he is the future of the red brand. Coming from NXT, along with his cousin Carrillo, it was time to demonstrate why he deserved to be taking a place on the Raw chambers. he needed an opponent to match him.

Kevin Owens, recently beating Rollins, was clear that he had enviable status. His rival, a Latino who should know better. As soon as he made his entrance, he was attacked from behind, right on the knee, which made it difficult to apply his movements during the fight.

Like Achilles’ heel, Owens had incessant pain in his knee, caused at all times by Garza. That he knew how to play his cards well. He knew that this victory could catapult him into the leading role of the brand, and aspire to star in the program. Along with Zelina he believed until the end.

When the referee applied the count of three and observed how all the fans, some booed and others applauded, he was at his best. If we review all the struggles he has had, it could be said that this has been the most important in his career.

The cover of Raw

the company as every week, brings out new posters promoting the fighters, and it is surprising to see heron in them. This supposes that it will take a greater role. What is surprising is that, in these difficult times, he knows how to continue triumphing program after program.

He’s a committed fighter, so if you have a small chance to show off something big, you won’t rest until you get it. If we add that he has Zelina, an experienced woman, on his side, then we can confirm that he is a dangerous fighter.