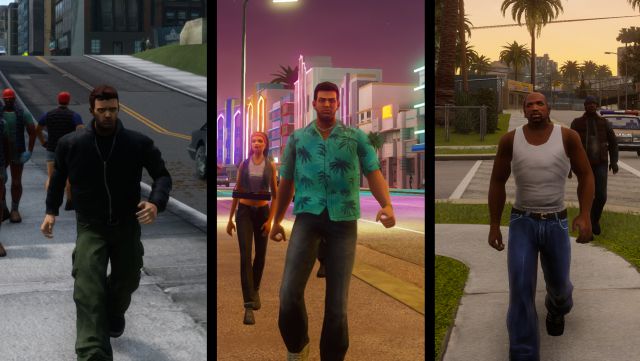 Grand Theft Auto: The Trilogy: Grand Theft Auto III, Vice City and San Andreas are relaunched in a compilation with lights and shadows. Rockstar Games does not live up to its legacy. Let’s talk about disappointments. Because it was a bit disappointing to see that Rockstar Games announced a compilation with the three Grand Theft Auto of the PlayStation 2 generation – games that add up to around 50 hours of content even if we stick to the main missions – and then not have access until the day of the premiere, delaying an analysis that reported on the conditions of the remasters. But it was even more disappointing to discover how that first day arrived, those who were encouraged to buy it found a product that was not very careful. Redesigns of questionable characters, severe optimization problems, glitches … The list is long, and serious on some of the platforms (although none are free of problems), which led to the review bombing of users before the press spoke. .

Under normal conditions, a text like this should have been dedicated to celebrating one of the most influential sagas in the world. To reminisce about how Rockstar reinvented himself over and over again, how he kept raising the bar while others tried to catch up with him from a distance. How he unleashed a fever for sandboxes, open world games with action, driving and a great feeling of freedom, which continues to this day. And we will still do that, at least to some extent. Because Grand Theft Auto III, Vice City, and San Andreas deserve both credit for their original impact and a reexamination of their modern currency. For many, surely this compilation will mean a reunion with one or more of them after years without revisiting them; And for others, it will be the gateway to cities they have never explored before, at least not in this way. But we warn now: the roads come with some potholes.

The city of liberty and debauchery

Last month, on the occasion of its twentieth anniversary, we decided to replay Grand Theft Auto III on its platform of origin: PlayStation 2. Although it would not take long to be ported to PC (and eventually, also to the first Xbox), the console of Sony served as the starting point for its development and release, receiving it several months before in a climate of genuine surprise. On the way to its launch, DMA Design’s game had not even been among the most anticipated of 2001, being overshadowed in magazines and events by names like Gran Turismo 3 or Metal Gear Solid 2. However, before the end of the year , GTA III became a real phenomenon. A bestseller that multiplied the numbers of its predecessors several times and practically monopolized the latest controversy about violence in video games.

Grand Theft Auto III was perhaps not the greatest technical marvel of the time, but it knew how to play its cards and convince us that we had an entire city at our disposal to do whatever we wanted. Did you like a car? You ran up to him, punched the driver, and he was yours. Did you want to wreak havoc? You started shooting and pedestrians fled in terror, sometimes being run over by the police themselves in their desperate attempt to catch us. The corpses left stains of blood, but also wads of bills or even weapons; And if an ambulance appeared to help, or a fire truck came after the cars were exploded, we could also steal them and participate in small missions dedicated to those trades. The same with police cars, or with a taxi if we wanted to emulate a certain arcade that Sega had released the previous year.

Of course, they are simple missions that soon fall into repetition. Pick up patients and take them to the hospital. Chase criminals and kill them. Go to burning cars and turn them off. Over and over again, against the clock. Now, in 2021, probably only the biggest fans or collectors of achievements will spend time with them; but then they served their purpose well of making Liberty City a lively and credible city, with mundane routines intertwined with the explosive gang wars in which the player inevitably ends up mediating. GTA was and still is an action game, but it has never been the best action game. His hook wasn’t so much the shots as that dedication to creating a whole world around them.

The constant coming and going of traffic and pedestrians, the natural transition between day and night, storms, the early morning mist, radio stations with jokes and announcements interspersed among the varied musical selection. Driving through the streets of Liberty City was an absorbing experience that retained its charm twenty years later, even if GTA IV multiplied the size and level of detail of the same city in the next generation. So when the main missions push us to kill members of rival gangs, destroy all kinds of vehicles or flee from the police in these same streets – with a Flashback FM hit animating the chase – GTA III is still a competent game despite lacking the variety of goals and narrative load that his successors benefited from.

Apple Original Films is shooting the Skydance film “The Gorge” with...

Xbox will host an event in the best E3 style with...