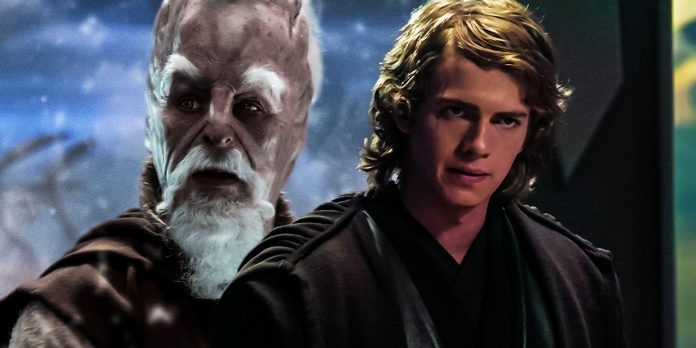 Anakin Skywalker is infamous for getting a seat on the Jedi Council before reaching the rank of Jedi Master in Star Wars: Episode III – Revenge of the Sith, but he’s not the first Jedi to hold this unique position. Ki-Adi-Mundi, a minor character in the Star Wars prequel trilogy, has an extensive biography on the Legends timeline, including an amazing number of parallels with Anakin Skywalker. Ki-Adi-Mundi not only joined the Jedi Council before becoming a Jedi master, but also joined the Jedi Order at an older age than most initiates, and later became a husband, while remaining faithful to the customs of the old Jedi Order. .

Anakin Skywalker’s desire to become a Jedi master was discussed in more detail in the novelization “Revenge of the Sith”, showing that Anakin cared little about a place on the council and the title of Jedi master, but he aspired to the privileges that this title gave. As a Jedi master, Anakin would have full access to the usually limited volumes in the Jedi archives, some of which are dedicated to the dark side of the Force, and Anakin believed they were keeping a secret to save his wife Padme from death. Anakin thought that a seat on the council without being a Jedi master was ridiculous, but Ki-Adi-Mundi, who was present at the meeting when Anakin expressed this outrage, had once been in a similar position.

As shown in various comics and novels of the “Star Wars Legends” era, such as the Jedi Apprentice series, The Jedi Council: Acts of War and The Cloak of Deception, Ki-Adi-Mundi was highly respected by Jedi masters Yoda and Mace Windu. which allowed him to temporarily take Mika Giett’s place on the Jedi Council and eventually take that position permanently after Giett’s death during the Yinchorri Rebellion. Mundi was only a Jedi knight at the time, but he worked patiently and with discipline to achieve the rank of Master within his unusual position. Mundi was also a husband, which was rare among prequel era Jedi, in addition to the fact that he joined the order as a young child, not an infant. Mundi managed to stick to the Jedi way despite his unorthodox lifestyle.

Jedi initiates usually join the Jedi Order as infants, which, although ethically questionable, does not allow them to form a particularly strong attachment to their biological families and home worlds. Anakin Skywalker joined the Jedi at the age of 9, and their dispassionate and detached lifestyle proved unhealthy for a newly freed slave who missed his mother. Ki-Adi-Mundi was never too attached to his home planet Cerea (at least by the old standards of the Jedi Order), but he took a special interest in protecting the planet throughout his time as a Jedi, including helping his people reduce the population.

Cerians, a kind of Ki-Adi-Mundi, had a catastrophically low birth rate, especially among men, so Mundi was in a polygamous relationship for the sake of procreation. This was formally allowed by the Jedi Order for the sake of the Mundi race, and with great difficulty Mundi avoided establishing a strong bond with his four wives and seven daughters. Anakin Skywalker, by contrast, was Padme Amidala’s infamous secret husband, a relationship that eventually prompted him to become Sith Lord Darth Vader out of fear of her death.

Ki-Adi-Mundi briefly became Anakin Skywalker’s Jedi master and in “Legends”, as shown in the Star Wars: Republic comics, when Obi-Wan Kenobi was mistakenly believed to have died in battle at the Battle of Jabiim. Mundi told Skywalker that he too struggled with attachment, losing his entire family to the Merchant Guild (a branch of the CIS) during the Battle of Cerea, but his advice was unfortunately heartless and banal for a padawan who believed he had already lost a father figure and a friend. For Mundi, the Jedi path was more important than his attachment to Cerea and his family, but affection was everything to Anakin Skywalker, hence his anger at being denied the title of Jedi Master in Star Wars: Episode III – Revenge of the Sith.