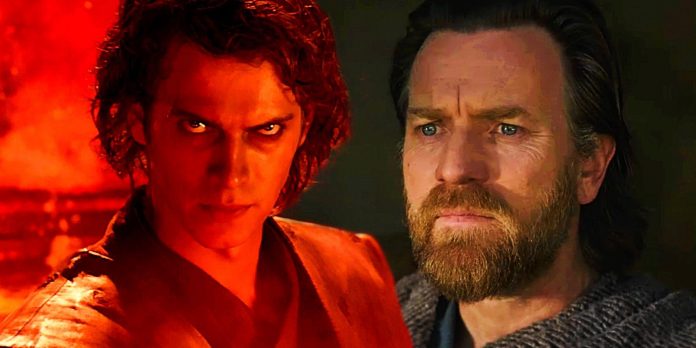 Anakin’s comments to his master in episode 5 of Obi-Wan Kenobi highlight Obi-Wan’s mistake in Star Wars: Episode III – Revenge of the Sith. The flashback scene on Coruscant, which runs through episode 5 of Obi-Wan Kenobi, continues to bridge the gap between the Disney+ show and the Star Wars prequels. Part of this connection is Anakin’s prediction that Obi-Wan will not be able to defeat his enemy in their lightsaber duel on Mustafar.

In the fifth episode of Obi-Wan Kenobi, Anakin Skywalker and Obi-Wan Kenobi fight in the Jedi Temple on Coruscant. The action takes place around the time of “Star Wars. Episode II: Attack of the Clones”, when Anakin was still a padawan, before his conversion to the Dark Side in Revenge of the Sith. Even during their friendly sparring, Obi-Wan witnesses Anakin’s focus on strength and might escalate into hostile aggression. Criticizing Anakin in his attacks, Obi-Wan says that “the purpose of a Jedi is to protect life, not to take it away.” When they turn back to back, Anakin retorts, “Mercy does not defeat the enemy master… That’s why you’re going to lose!”

Anakin’s assumption is that Obi-Wan’s compassion for life is a weakness, a mistake in the heat of battle that can only lead to defeat. Unknowingly, Anakin predicted the mistake that Obi-Wan eventually makes in Revenge of the Sith – when he fails to kill Anakin after their duel. Instead, leaving him to die on the banks of a lava flow, Anakin survived and eventually turned into Darth Vader. Obi-Wan’s act of mercy is a mistake that condemns countless innocent people to the evil that Darth Vader unleashes on the galaxy soon after.

Anakin and Obi-Wan have always had a complicated relationship. Although they were friends right up to Revenge of the Sith, they also have a mentor-mentor, Jedi master, and Padawan relationship linking them to the great chain of the Jedi tradition dating back several generations. Anakin sees Obi-Wan as a mentor and father. All these different and contradictory relationships come together when Anakin turns to the Dark Side. While Darth Vader kills him without hesitation, Obi-Wan Kenobi still sees his student and friend Anakin in Darth Vader. Although he drew his lightsaber first, in the end Obi-Wan cannot bring himself to kill Anakin on the lava banks of Mustafar. His love for Anakin is his mistake. At the moment when he believes that he has defeated Anakin and will die from his wounds. First of all, a Jedi, Obi-Wan does not take life lightly, even if he believes that it is already lost.

Before the events of the Disney show+ Obi-Wan Kenobi thought Anakin was dead, and the series gave the Jedi master hope after a generation that had lost faith. Although Obi-Wan’s mistake in Revenge of the Sith was to show mercy, Darth Vader’s lack of mercy also ruined him. If Darth Vader had shown mercy in a New Hope and captured his former master rather than slaying him, Obi-Wan would not have become one with the Force. He wouldn’t have directed Luke at the Battle of Yavin or sent him to Yoda in The Empire Strikes Back, which ultimately led to Anakin Skywalker’s redemption in Return of the Jedi. The lesson of protecting life in Obi-Wan Kenobi’s 5th episode may have been lost on Anakin, but in the end, Obi-Wan’s mercy to Mustafar is what ultimately defeated the enemy.