Home News Anadolu Efes is the champion of the THY Europa League for the... 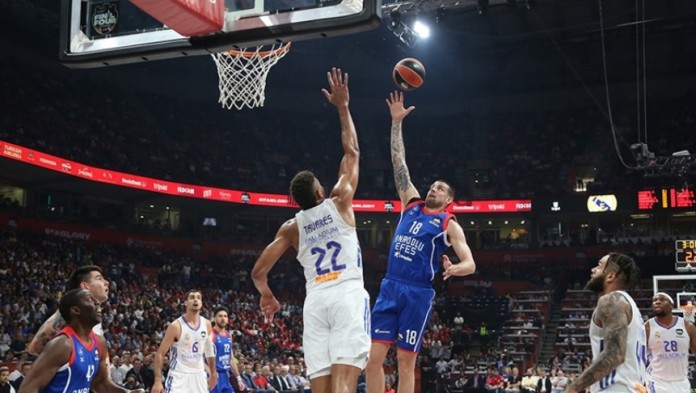 In the match played at Stark Arena, Anadolu Efes scored with Micic and Larkin, and Real Madrid, who used the bottom of the basket quite well with Tavares, finished the first quarter ahead 15-14.

In the second quarter, which started with mutual baskets, Real Madrid, which was effective with the numbers gained by the players who were included in the game from the side, went 34-29 in the dressing room.

At the beginning of the second half, both teams struggled to score. Real Madrid increased the lead to 9 points in the 25th minute in front of Anadolu Efes, which played with a low percentage on offense: 40-31. The navy-whites, who recovered and caught a 7-0 series, narrowed the gap to 2 in the 28th minute: 40-38.

With 33 seconds left in the quarter, there was an argument between Poirier and Anderson. Rudy Fernandez remained on the ground in a duel with Anderson. Poirier then pushed Anderson, whom he was walking on. Other intervening players prevented the tension from escalating. The referees, watching the position from the side screen, penalized Anderson and Poirier with an unsportsmanlike foul. Real Madrid entered the last quarter with a 42-40 lead.

Starting the fourth and final quarter well, Anadolu Efes took the lead in the 32nd minute with Micic’s accurate throw away: 42-43. The remaining part was the scene of great excitement. Responding to Real Madrid, which was effective with Causeur and Llull, with Singleton in defense and Micic and Pleiss in offense, Anadolu Efes won the match 58-57 and became the champion.

Bill Gates Speaks About Bitcoin! Here are the details