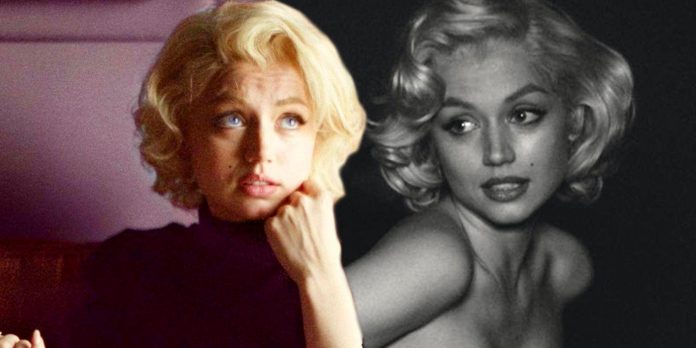 Blonde writer Joyce Carol Oates praises the NC-17-rated Netflix biopic of Marilyn Monroe starring Anna de Armas. Oates published a fictionalized biography in 2000, which traces the life of Norma Jean Baker, also known as Marilyn Monroe, from an American girl from a small town to a Hollywood starlet, including many trials and tribulations along the way. Director Andrew Dominick has taken on a new adaptation of “Blonde” for Netflix, which became their first original content to receive an NC-17 rating.

CBS adapted The Blonde in 2001 as a miniseries starring Poppy Montgomery as Monroe, which was a less controversial approach to Oates’ material than what Dominic produced. The director loudly stated the difficulties of delivering the film to Netflix with an intact vision, although he praised the streamer for staying with his view of “Blonde” rather than forcing him to edit it to an R rating. Dominic said that “there is something in it that can offend everyone” in the movie “Blonde”, and supported the rating, although he disagreed with it, saying: “This is an NC-17 movie about Marilyn Monroe, that’s what you want, right. ?”

Oates has now seen Dominic’s version of “Blonde” and expressed her reaction to it (via Collider), saying that, in her opinion, the director “succeeded” in faithfully bringing her novel to life. She went on to say that, in her opinion, the director “immersed himself” in Marilyn Monroe’s point of view, avoiding traps, showing her life from the outside, looking inside. At over 700 pages, the novel is one of Oates’ most ambitious works. which was also nominated for a Pulitzer Prize, and its adaptation for a feature film was a difficult task, but it seems that Dominic coped with it. Here is her quote:

Andrew Dominic is a very brilliant director. I think he managed to show the experience of Norma Jean Baker from her point of view, and not see it from the outside, with a man’s gaze looking at a woman. He immersed himself in her worldview.

Further, the author praised the performance of Ana de Armas in “Blonde”, saying that she withstood about four hours of makeup to turn into a physical version of Marilyn Monroe. Oates compares the transformations of the cast to those so precise that it seems that “they don’t really exist” as actors, presumably more like historical figures. She praises de Armas’ “wonderful” talent and says that watching her on screen after her transformation into a character “… looks like a fantastic image, but to make it a means of livelihood, you have to endure a lot of suffering.”

Marilyn Monroe remains a cultural icon to this day, but much of her history is shrouded in her Hollywood image, rather than the realities of her path to becoming a household name, which was not as easy, fair or profitable as one might think. , especially in her era. A fascinating and tragic story, Marilyn Monroe’s life will no doubt be enlivened by Dominic’s film, which is already fraught with disputes over the NC-17 rating and long delays due to the fact that the film was assembled in such a way that it satisfied both Dominic and Netflix. . The author’s endorsement can certainly help attract more viewers to watch the film, but the endorsement goes so far, and it will be interesting to see the overall reception of the film when “Blonde” reaches Netflix subscribers in September.