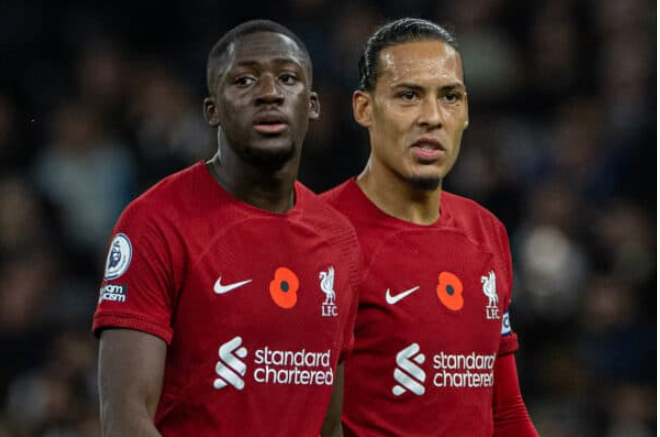 Virgil van Dijk has set new standards for a central defender and knows what it takes to succeed, and he has no doubt that Ibrahima Konate will be for Liverpool in the present and future.

Konate’s 2022/23 season has been halted to date due to injury, in which Jurgen Klopp’s team has played only four times.

But his quality speaks for itself and it sees him in the French squad for the World Cup as they want to defend their crown and reports say he could start in the first match against Australia.

The 23-year-old had an outstanding debut season for Liverpool, playing 29 times and playing alongside Van Dijk in 19 of those matches.

After seeing him on and off the pitch, Van Dijk named Konate as the Liverpool player who caught him most by surprise during his time at Anfield, and the electric Luis Diaz also got a mention.

“It’s difficult, but I think Konate has become very outspoken, playful and chatty in terms of personality over the last year, but he’s certainly good on the pitch,” Van Dijk told Pitch Side.

“An incredible player at the moment, but also in the future. He’s the first one that comes to mind.

“But also Luis Diaz, who came in the winter, who knows for me personally how difficult it can be to join a new team and settle in as quickly as he does, so these two guys immediately come to mind.”

Two brilliant transitions from the club in seven months.

As for the best player he has ever played with, Van Dijk’s response will not come as a complete surprise to Liverpool fans who have witnessed his playing intelligence for more than seven years.

“At Liverpool, probably Bobby Firmino. Knowing how difficult it is to play against him as a defender because he falls deep,” Van Dijk explained.

“I’ll name him, but you know, Mo Salah, Sadio Mane, Thiago, it was nice to play with these guys.

“We have Frankie de Jong in the national team, who is really good.

“When he debuted, we started to really change the way we play, and he really influenced us. He is incredible, and I hope he will show us a great performance at the World Cup.”

Speaking about de Jong, the Dutchman recently spoke about how “one guy told me that I should join Liverpool when the Dutch national team met with migrant workers who helped build infrastructure in Qatar. Unlikely, but you should appreciate the effort.

Pietro and Laura are looking for a name for the baby...

Lost Ark: See The Location Of All Continent Views