Home News An extraordinary romance: they got married to the NFT ring 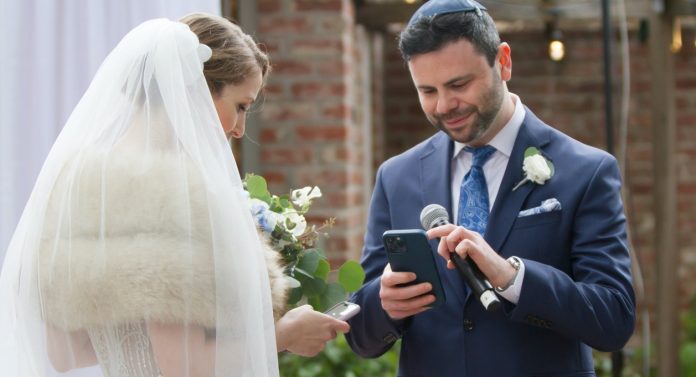 NFTs, also known as immutable tokens, have an important function today. Some use it for collecting crypto art; others convert their tweets to NFT and sell them. But none of these examples were as unusual as that couple that NFTized their wedding ring.

Two Coinbase employees, Rebecca Rose and Peter Kacherginsky, joined their lives on Friday. The couple, who married in a traditional Jewish ceremony, took an unusual step at the ceremony. Instead of physically wearing rings, the two bought “virtual rings” and sent each other digital tokens for it. Rose considered this act “proof of their commitment to each other”.

Rebecca Rose and Peter Kacherginsky, who prepared a smart contract for their marriage, keep this document in their cryptocurrency wallets. As can be expected, the rings of their extremely modern marriage are also in NFT. However, the couple also adorns this nicely and names the coin with the word “Tabaat”, which means “ring” in Hebrew. The animated image prepared by artist Carl Johan Hasselrot defines the couple’s relationship with intertwined circles.

The name of the token is Tabaat, the Hebrew word for ring. We stored an animation by artist Carl Johan Hasselrot (@cjhasselrot) inside the unique tokens, which illustrates two distinct things becoming one, like in marriage. #NFTArt 3/7 pic.twitter.com/5s8hLGbRdG

The couple was very pleased with this interesting marriage ceremony, which until recently might sound like a science fiction story. Rebecca Rose explained why she preferred NFT rings over physical rings on her Twitter account:

“Blockchain objects survive forever, unlike physical objects. It cannot be stopped, censored, and does not allow anyone to interfere. Just like it should be in a true love. What could be more romantic than that? Most people get married at a religious place of worship, on the beach or in the countryside. But Peter and I are not like other people. We got married to Blockchain! ”

Famous basketball player LeBron James sold his historic dunk shot with the Los Angeles Lakers jersey for $ 200,000 NFT. Non-fungible token trade is on the rise all over the world.

What do you think about this extremely different marriage ceremony and NFT trend? Don’t forget to share your ideas with us.