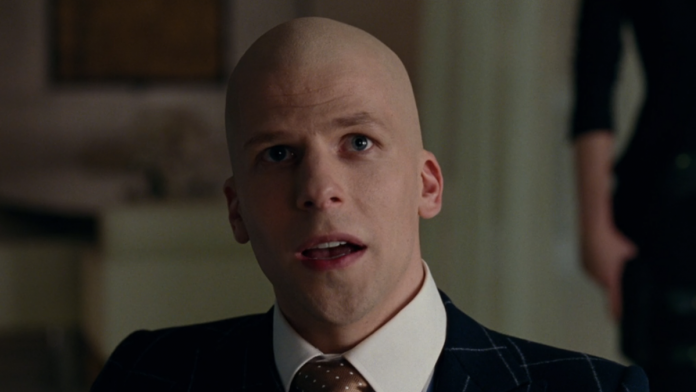 The DC Extended Universe is known for its twists both on-screen and off-screen. Warner Bros. recently, took some bold steps, completely abandoning the movie about Batgirl, despite the fact that it was already shot with a stated budget of 70-90 million dollars. Will Jesse Eisenberg be able to play Lex Luthor on the big screen again during these DC permutations?

When the DC film universe was still being formed, Zack Snyder chose Jesse Eisenberg for the role of Lex Luthor in the movie Batman v Superman: Dawn of Justice. He was the main antagonist of this big crossover before briefly appearing in Justice League. According to Deadline, Eisenberg was asked about the possibility of wearing a bald cap again for another performance during an appearance at the 28th Sarajevo Film Festival. He answered honestly, saying:

I would be shocked if I ended up in a DC movie, but it would be a nice shock. Look, I’m not a fan of comics. For me, this was not the role I had imagined since childhood. It was a chance for me to play a great character that this great writer wrote, and I loved doing it. So playing it is a joy, and not playing it is not something I would be ashamed to tell my children about, because it is not an important genre in my life, although I liked to act in this film. .

Well, that’s it. It seems that while Jesse Eisenberg would love to play Lex Luthor again in the DC Extended Universe, he doesn’t think that’s going to happen. He doesn’t seem to have had much contact with the powers that be in D.C. since he appeared in his cameo in Justice League. In the end, Zack Snyder’s planned sequels were canceled due to the poor box office of the theatrical version and critical performance.

Jesse Eisenberg’s comments are of great importance to those of us who follow the ever-changing strategy of Warner Bros. regarding the DCEU. His role as Lex Luthor eventually became the vehicle for Zack Snyder’s five films about the shared universe. So once that vision stopped controlling the shared universe, there was no reason to bring back the villain Eisenberg. Or even Henry Cavill’s Superman, for that matter. Although fans are still hoping for a sequel to “Man of Steel”.

Although Jesse Eisenberg doesn’t think he’ll play Lex Luthor on the big screen again, will he want to star in another superhero movie? The same question was asked to the actor of Zombieland, who shared good news for ardent fans of the genre. Eisenberg said,

The size of a film’s production cannot judge its merits, and therefore Jesse Eisenberg is not in the habit of excluding entire genres of the film industry. Although the question arises: which comic book character should he jump into in the MCU or beyond? There is a seemingly endless set of options.

Jesse Eisenberg has several interesting projects on the way, including the film “Manodrom” and the upcoming mini-series “Fleishman in Trouble”. In the meantime, check out the movie’s release dates in 2022 to plan your next movie.

NIO Wants to Make a Tesla Smartphone That Won’t