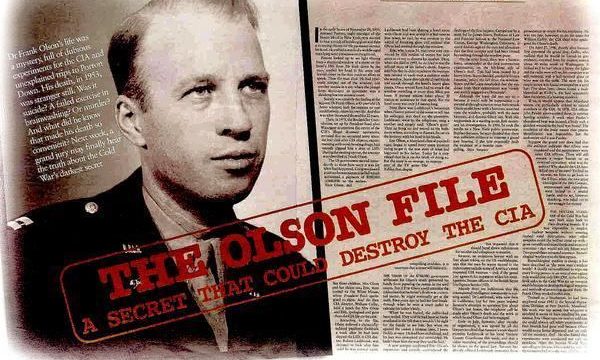 The enigmatic death of Frank Olson, a scientist working for the CIA during the Cold War, when the U.S. and the Soviet Union tried to dominate each other, is still under discussion today. Olsun’s family claims that the unfortunate scientist was killed, not as committed, as it was said.

The Cold War era, which continued between 1947 and 1991, between the USA-led Western Bloc and the Soviet Union-led Eastern Bloc countries, witnessed military, technology, space, politics and science-based superiority struggles.

The Central Intelligence Service (CIA), which was founded in the period of President Harry S. Truman in 1947 when the Cold War started, enabled the US to gather very critical intelligence related to foreign countries. At that time, scientist Frank Olson, who had learned some of the important secrets of the CIA, fell from his room on the 13th floor of a hotel in New York in 1953 and died. Federal officials did not allow his family to see Olson’s body. Instead, they said that she had mental problems some time before she died and committed suicide by jumping through the window.

The Statler Hotel, where Frank Olson fell from the 13th floor
But Olson’s nephew Paul Vidich claims that his uncle was actually killed by the CIA in his new book, The Coldest Warrior. Vidich said that Olson had some secrets about the secret strategies and techniques that the US used in the Cold War, among them the questioning techniques and the fact that the CIA collaborated with the Nazis and some Japanese war criminals after World War II. suggests that it is.

In 1975, the Olson family meets with President Gerald Ford at the Oval Office
Vidich says that 18 years after his uncle’s death, that is, in 1975, Lisergic Acid Diethylamide, or LSD, was detected in Olson’s body. Stating that this fact emerged in the Rockefeller Commission commissioned by Gerald Ford, the president of the period, to investigate the CIA, Vidich says this is a very important break. After the incident was heard, President Ford invited Olson’s family to the White House and apologized and gave the family $ 750,000. But Vidich states that in exchange for this money, Olson’s family has been signed a confidentiality agreement that protects the CIA.

Olson’s older son, who never believed in the stories told to him, removed the body of his father from the grave in 1994. Examining the body, the pathologist concluded that Olson’s skull injury provided consistent evidence that he was killed in his room and then thrown out the window. Olson’s death is officially classified as “uncertain”; however, all the evidence that came out decades later suggests that the scientist has actually fallen victim to a murder.

Owner of the Nottingham Forest reveals that he suffers from coronavirus