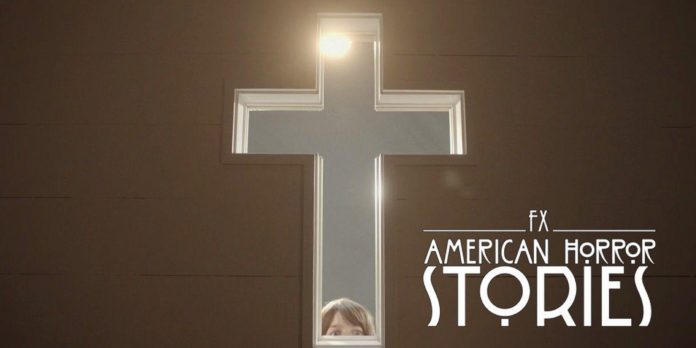 American Horror Stories strikes gold with “Milkmaids.” The newest episode of the horror series is artistic, grotesque, and horrifying in its delivery, which combines to make one of the best episodes the series has ever seen. Alonso Alvarez-Barreda, the director of “Milkmaids,” does phenomenal work to create a memorable atmosphere that is thrilling from start to finish. Our Lady J, who wrote “Milkmaids,” deserves an equal round of applause for crafting the episode’s stomach-churning narrative, as does the cast.

“Milkmaids” stars Julia Schlaepfer, Seth Gabel, Addison Timlin, Ian Sharkey, and Cody Fern, who has starred in both American Horror Stories and American Horror Story. This handful of stars is all “Milkmaids” needs to create a treacherous and truly unforgettable story that will begin with viewers contemplating whether to look for the nearest trashcan or keep their eyes planted on the screen. For fans of the original series or the horror spin-off, “Milkmaids” is an absolute can’t miss.

“Milkmaids” sets the tone immediately. With a New England setting in 1757, the black screen quickly disappears to reveal the wife of Thomas Browne (Fern), who has died from smallpox. With the sight of the grotesque boils that litter the woman’s body, there is no surprise that the town’s panic over the disease has continued to increase. Shortly after, viewers are introduced to Celeste (Schlaepfer), who is certain she has been given a gift from Saint Lazarus to heal the town from smallpox. The boils litter her own body, though she isn’t sick. She remarks that anyone that has fed from the boils has gone on to have the same fortune as her: remaining healthy where death from the disease surrounds them. Her newest patron, Paster Walter (Gabel), is repulsed by the concept and threatens to hang Celeste for her unGodly acts.

The tension between Celeste and Walter is the backbone of “Milkmaids.” From there, the episode introduces a second monstrous layer, as Thomas tells Walter of a nearby town that cut the hearts from the dead, burning them, to rid the town of smallpox. Desperate, the men cut the heart from Thomas’ wife, but Walter suggests they eat it. Walter’s suggestion boils over into an intense fascination with cannibalism, later encouraging the rest of the town to follow suit. The tension then spreads, creating a rift between Thomas and Walter, and Thomas and his son Edward (Sharkey).

“Milkmaids” introduces a number of layers to its plot, from the tension between its characters to the distrust Walter has toward milkmaids, and the threat of death that lingers over the episode, but it isn’t too much. The multifaceted technique of “Milkmaids” creates an environment that has so many ways to go wrong, and that is part of what makes it so enticing. This hasn’t always worked well for American Horror Stories or its predecessor, but “Milkmaids” actually ties all the pieces together without it feeling rushed, even within the 45-minute confine.

This doesn’t mean “Milkmaids” doesn’t allow its audience to raise any questions. Walter’s swift adaption to cannibalism is a surprising twist, given his reaction to Celeste’s boils. An odd realization that could leave some scratching their heads, further personifies not only how dangerous power can be, but how lethal true evil can be. The ostracism of the milkmaids within the episode is a lot like a witch hunt. As random as Walter’s distrust in the milkmaids seems, it provides American Horror Stories with an uneasiness that relies on its relationships with its characters and not the literal environment the characters are in.

The true horror of “Milkmaids” isn’t the actual disease or the cannibalism, but how quickly monstrosity can spread. As Walter suggests cannibalism to the congregation, he is immediately met with eagerness. Their desperation for a way out of their fear and suffering, along with their trust in Walter and the church, is what blinds them to the odd suggestion. Walter’s repeated argument that “milkmaids can’t be trusted,” is an equally dangerous ideology within the episode. When Delilah (Timlin) provides a potential cure that doesn’t involve human hearts, she is condemned and distrusted on the pure basis that she is a milkmaid.