American Horror Stories: The American Horror Stories series, spin-off from American Horror Story and also created by Ryan Murphy, had the first cast names released, as well as the release date. On his official Instagram account, the producer posted a photo of four veteran actors from his productions: Kevin McHale of Glee, Charles Melton of Riverdale, Nico Greetham of The Prom and Dyllón Burnside of Pose . Also in the publication, Murphy revealed that the series will premiere on July 15th.

Unlike the original series, in which only one story was told per season, the spin-off will follow the anthology format, bringing different tales in each of its episodes. In addition, the series will also not be produced for television, but for the streaming service Hulu, in the United States. In Brazil, the platform arrives in August under the name Star+.

The first season of the series will have 16 episodes with myths, legends and horror stories. Meanwhile, the 10th season of American Horror Story gets the “Double Feature” add-on in its name and also had a release date revealed: the series opens on television on August 25th.

This time, the new season will tell two different stories, one that takes place at sea, and the other on the beach. The series’ cast includes Macaulay Culkin, from Home Alone, and Paris Jackson. Leslie Grossman, Angelica Ross, Evan Peters, Finn Wittrock, Kathy Bates and Lily Rabe also return to the series.

In addition to American Horror Story, Ryan Murphy is also known for other hit titles such as Glee, Ratched, Pose, Hollywood, Scream Queens, The Politician and 9-1-1.

So, what did you think of this news? Leave your comment below and enjoy sharing the article on your social media pages! 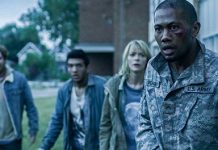 Halo Infinite Will Be Compatible With Dolby Vision And Dolby Atmos...