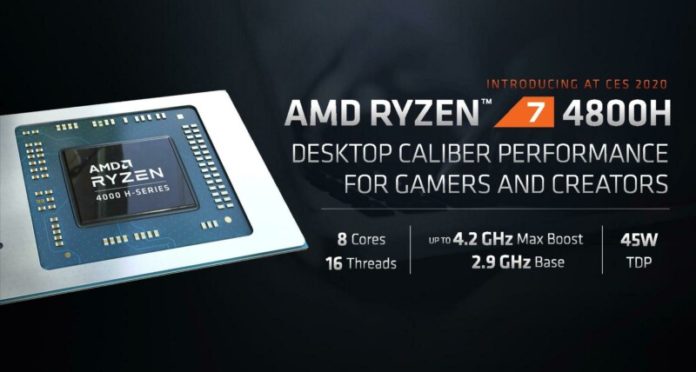 The company promises desktop-class performance on portable computers with the 15W Ryzen U Series, designed for laptops, and the 45W Ryzen H Series, which delivers powerful gaming and content creation performance. AMD will also compete against Ryzen 3, Ryzen 5 and Ryzen 7 in the U Series and H Series against Intel’s Core i3, i5 and i7 processors.

AMD processors are designed to compete head-to-head against Intel’s next-generation chips. According to AMD CEO Lisa Su, the Ryzen 7 4800U, the best of the newly introduced U-Series processors, features an 8-core 16-threaded design and a 1.8 GHz frequency rate of up to 4.2 GHz.

More importantly, the Ryzen 7 4800U delivers 4 per cent better performance on single threads, 90 per cent on multiple threads and 28 per cent on graphics, compared to Intel’s 10 nm Core i7-1065G7 Ice Lake processor.

Su also said that the new Ryzen 4000 processors are twice as energy efficient as the second generation Ryzen chips, with the switch from 12nm to 7nm manufacturing technology. In the 45W H Series, the Ryzen 7 4800H offers 8 cores, 16 threads with a base speed of 2.9 GHz and speeds up to 4.2 GHz.

With the new Ryzen 4000 processors, AMD hopes not only to catch up with Intel, but also to achieve leadership in performance and battery life. AMD has announced that the first AMD Ryzen 4000 series processors will be on the 2020 models of manufacturers such as Acer, Asus, Dell, HP and Lenovo.

Detecting the furthest object in the Solar System