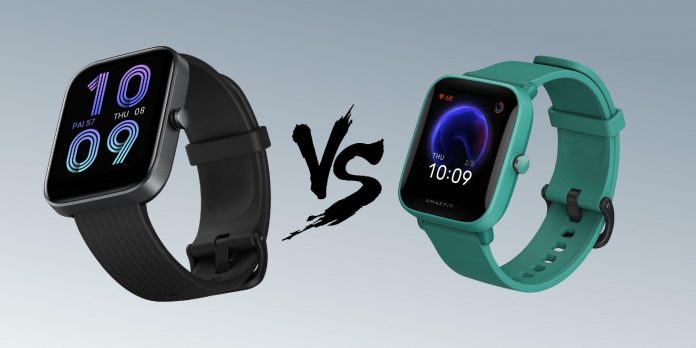 Zepp recently announced the Amazfit Bip 3 Pro smartwatch for $69.99, at the same price as the Amazfit Bip U Pro, but which of the two wearables is better to buy? The Amazfit Bip smartwatch is known for its affordability and long battery life. The first model was called Amazfit Bip and was released in 2017, but it did not appear in the US until the following year.

The original Amazfit Bip sold for $99 and had a transflective display, a built-in GPS chip and a battery life of up to 45 days. Although the new models are now cheaper and contain more features, none of them could match the battery life of the first watches in this series. This is partly due to additional hardware and software features added to the new smartwatch.

Amazfit Bip 3 Pro and Amazfit Bip U Pro are easy to distinguish because the former is much larger. However, they are made of the same materials, have the same rectangular dial and a single-button design. Both smartwatches have a polycarbonate case, a display protected by 2.5D glass, and 20mm quick-release silicone straps (textured straps for Bip 3 Pro). They also have a water resistance rating of 5 ATM. The Amazfit Bip 3 Pro is slightly heavier at 33.2 grams and is available in black, cream and pink, while the Bip U Pro weighs 32 grams and can be purchased in black, green and pink.

Both watches have monitoring of oxygen levels in the blood

One of the Amazfit Bip 3 Pro updates is an enlarged display. Compared to the 1.43-inch screen of the Amazfit Bip U Pro, its screen has a size of 1.69 inches. However, the IPS Bip U Pro LCD display has better viewing angles and better color reproduction. It also has a higher resolution of 302 x 320. In contrast, the Bip 3 Pro uses a TFT LCD panel, which has the advantage that it is more energy efficient, but not as clear and does not have a wide viewing angle. In addition, its 240 x 280 resolution is also lower and will be noticeable due to the size of the screen.

Both watches have a BioTracker 2 PPG sensor to track heart rate throughout the day and monitor blood oxygen levels. They also support sleep tracking, stress tracking, and menstrual cycle tracking. Both Zepp smartwatches support tracking more than 60 different sports, including basic sports such as walking, running and swimming, as well as martial arts, boxing and archery. Although both support location tracking, the Bip 3 Pro should be better at tracking as it supports four satellite positioning systems, unlike the Bip U Pro which only has one.

On the other hand, the Bip U Pro has a gyroscope and a geomagnetic sensor (electronic compass). It is also the only phone with Amazon’s built-in Alexa voice assistant, and with the help of a microphone, owners can call an assistant in the same way as on an Echo or Fire TV smart speaker. Unfortunately, there is no speaker, so you can’t use it for calls. The Amazfit Bip 3 Pro has a larger capacity battery that provides up to 14 days of normal use or seven days of intensive use, while the Amazfit Bip U Pro provides up to nine days of normal use and five days of intensive use.