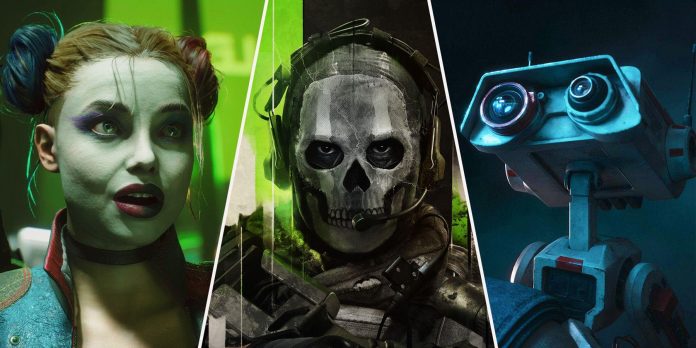 PC players are starting to see a lot of console-exclusive ports make their way to Steam and various launchers. This is great news for anyone who’s felt like they’ve been missing out without owning a console, and it’s clear that the lines between console and PC are beginning to blur, especially concerning Microsoft and their desire to port their impressive games library to both systems.

Game Pass has made things even more lucrative and many series once thought console-locked forever are receiving PC versions (even if it takes a year or so to adapt them over).

Those playing games on a PC have a lot to look forward to in 2022 and beyond, with some high-profile ports, awesome-looking Indie releases, and AAA titles that are sure to look absolutely stunning on a high-end build. Here’s a look at all the titles we can expect to see on the PC in the rest of 2022, along with games that do not have specific release years. What are the most exciting 2022 PC games?

Please note the focus is on North American release dates.

The heart of summer is shaping up to be a decent month for gamers. At the moment, there are only a couple of major PC games announced for August 2022, but titles such as Saints Row, Two Point Campus, Madden NFL 23, and Thymesia are likely to attract a lot of attention.

Marvel’s Spider-Man will be making its way from the PlayStation Store to the PC market in the form of a remaster. Insomniac’s superhero game garnered high praise for its controls, open-world design, and combat system. Pac-Man World Re-PAC, a remake of the classic 3D platformer, will also come out in August 2022.

August’s Saints Row looks set to be the turning point for the year, leading to more consistent releases of marquee projects. JoJo’s Bizarre Adventure: All-Star Battle R is a fighting game that brings together 50 playable characters from Hirohiko Araki’s influential manga, covering all the arcs in the series. Coinciding with the second season of the anime that will be airing throughout Summer 2022, Made in Abyss: Binary Star Falling into Darkness could be something special if the game comes at all close to replicating the quality of the show and manga.

Steelrising, NBA 2K23, Warhammer 40,000: Darktide, and Metal: Hellsinger are all exciting games in their own right. While they might be a bit niche, they will undoubtedly find dedicated audiences. The same can certainly be said for Evil West, a dark fantasy western that looks like a bloody good time. The Diofield Chronicle and The Legend of Heroes: Trails from Zero should have the JRPG market covered for the month.

October 2022 is shaping to be a massive month for every gaming platform, but PC might just take the cake. If nothing gets rescheduled, barely a few days will pass in-between notable releases, and things are set to get rolling quickly with Overwatch 2’s launch. At the moment, the hero shooter does not look like a significant departure from its predecessor, although it does not need to be. A couple of days later, Firaxis Games’ Marvel’s Midnight Suns will hit the market, delivering a tactical-strategy game featuring a wide plethora of iconic comic book characters. For people who prefer their superheroes to be in action games, Gotham Knights is set to launch towards the end of October 2022.

Dragon Ball: The Breakers is a 4v1 multiplayer game akin to Dead by Daylight or Evil Dead: The Game, a genre the popular anime license has yet to tackle. If it is as good as its predecessor, A Plague Tale: Requiem could be one of the year’s best games. JRPG fans can look forward to picking up Persona 5 Royal or Star Ocean: The Divine Force, although the games are very different from each other.

Call of Duty: Modern Warfare 2 and Resident Evil Village’s Winters Expansion are set to bring the month to a close, and October should go out on a high.

PC Games Announced For The Rest Of 2022

What does the rest of 2022 hold for PC players? Fans of the Jet Set Radio franchise are eagerly awaiting Bomb Rush Cyberpunk, and Dinos Reborn looks to take the Ark: Survival Evolved formula to the next level.

2022 should see the release of the anticipated pirate adventure, Skull And Bones. Company of Heroes 3 has also been announced for November 2022. There are plenty of other titles that are expected to drop within the year, including Avatar: Frontiers of Pandora, Harry Potter: Hogwarts Legacy, and Goat Simulator 3.

Regardless of whether someone plays on PC or consoles, they should be intimately familiar with the “Release Date TBA” game. These titles are coming in the near or distant future, there just is no confirmation on when exactly that “future” will transition into the present. Beyond Good and Evil 2, The Elder Scrolls 6, and System Shock 3 will hopefully exist one day, but the information is currently limited. The wait for these titles to drop might be long but, hopefully, they will be worth it.

RELATED: Games Coming In 2021 (Ranked By Their Graphics)

Rumors are an inescapable part of any industry, particularly gaming. Some are founded on genuine information, while others are little more than wishful thinking; either way, there is nothing wrong with speculating about where PC gaming might go in the coming years.

Jason Momoa was not injured after a head-on motorcycle collision in...