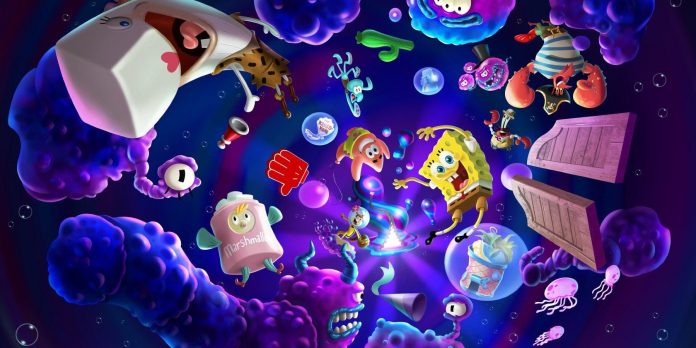 When it comes to iconic children’s cartoon characters, there aren’t many as memorable as SpongeBob SquarePants. Debuting back in 1999, SpongeBob SquarePants has been in the spotlight of children’s cartoons for more than two decades, outpacing even some of the greatest TV shows ever created. And over the past 23 years, many SpongeBob video games have been released, some of which have hit the Nintendo Switch.

During the last Nintendo live broadcast, a new SpongeBob SquarePants trailer was shown: The Cosmic Shake. In the new 3D platformer from the developer Purple Lamp, the legendary anthropomorphic sponge travels through seven different outlandish worlds, each of which is filled with bright colors taken directly from the show’s favorite art style. Although this is the last SpongeBob game to appear on Switch, it’s definitely not the first.

The first SpongeBob SquarePants game to appear on the Nintendo Switch was SpongeBob SquarePants: Battle For Bikini Bottom — Rehydred, released in June 2020. A simplified 3D platformer in which players control the titular blockheads, Sandy and Patrick, defeat a variety of underwater threats and collect a bunch of shiny items to trade with Mr. Krabs to move forward.

In this remake, many technical improvements were made, and a new horde multiplayer mode was introduced in the game. SpongeBob SquarePants: Battle For Bikini Bottom – Rehydrated received some pretty rude reviews at launch, and publications such as IGN and GameSpot condemned the game for preserving mechanics that seem outdated in the modern era.

A year later, a port of the mobile game SpongeBob: Krusty Cook-Off appeared on the Nintendo Switch. This game, again, is quite simplistic, but unlike a 3D platformer, Krusty Cook-Off is a fast food cooking simulator. In between cooking, players can set up their own additional Krusty Krab restaurant by decorating the dining room and kitchen with the money they earn from cooking. Although its price in the Switch online store is a bit high, SpongeBob: Krusty Cook-Off is a reliable, albeit ordinary cooking game.

As one of the company’s biggest mascots, SpongeBob has also appeared in numerous Nickelodeon team games. The first of them on Switch was Nickelodeon Kart Racers 2018. Nickelodeon Kart Racers had a strong lineup, but a terrible approach to gameplay. Although the game tried to mimic Mario Kart at every turn, it failed to achieve the same level of responsiveness or control, which led to the game seeming too weightless and arcade-like. On top of that, critics have devastated Nickelodeon Kart Racers for rough graphics, lack of voice acting, and lack of other Nick properties.

In October 2021, Nickelodeon All-Star Brawl was released. Aiming to become a competitor to Super Smash Bros., All-Star Brawl attracted a lot of attention before its release, but expectations quickly dissipated as soon as the game hit the shelves. Like Nickelodeon Kart Racers, All-Star Brawl failed to realize its potential. Despite the fact that the cast was strong and the basic mechanics were far from bad, the game eventually seemed a bit cheap and empty, partly due to the lack of voice acting.

SpongeBob SquarePants: The Cosmic Shake is currently in development for PC, PS4, Switch and Xbox One.