Home Entertainment All Pokemon Collectible Cards that you can get in the latest McDonald’s... 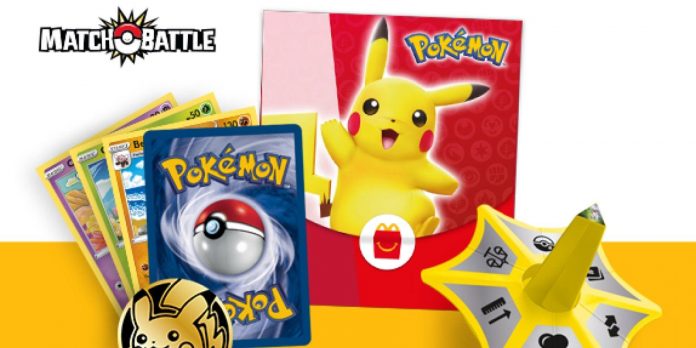 McDonald’s collaborations in the past with popular brands and celebrities have always been successful, causing crowds of customers to flock to the fast food outlet to buy limited edition specials such as BTS food and Travis Scott food. Past McDonald’s and Pokemon crossovers were also phenomenally popular, so fans were excited when rumors and reports began to appear that a new promotion was brewing between the two companies. Fortunately, the reports were confirmed this week when McDonald’s unveiled a new Happy Meal, which features a variety of Pokemon goodies. Pokemon-themed Happy Meals have always been sold like hot cakes, so Pokemon fans will have to hurry up if they want to take advantage of the promo offer.
Happy Meal includes four Pokemon cards and all the items fans need to play Match Battles with friends. One of the four cards is also holographic, which should make the offer attractive to collectors, since some holographic cards can be very valuable. Scalpers will probably keep an eye on the cards as well, but the fast food outlet has imposed restrictions to try to ensure that all cards are not stolen before fans get a chance to enjoy them. The promotional offer comes just in time for the release of Pokemon Scarlet and Violet, which fans are looking forward to.
RELATED TO: Pokemon Scarlet and Violet: Prediction of the Supposedly “Broken” Hidden Ability of Sprigatito Evolution

Each Happy Meal contains four Pokemon cards, instructions, a coin, a spinner and a card box. With these items, you can play Match Battles, a game in which the last player with Pokemon in the game wins. However, for many fans, the main attraction is the cards, and there are fifteen Pokemon cards that need to be collected. Holographic versions of these cards are also available, so collectors should pay attention to them during the entire period of the promotional offer, which will last until September 6. Fifteen Pokemon cards:
Bewear Chinchou Cutiefly Drampa Flaaffy Gossifleur Growlithe Lapras Ledyba Pangoro Pikachu Rowlett Smeargle Tynamo Victini
Fans wishing to purchase Pokemon Happy Meal will have to hurry up, as they tend to sell out quickly, sometimes due to speculators seizing in-demand cards and reselling them on eBay at exorbitant prices. This happened in early 2021, when a Pikachu card from McDonald’s Happy Meal was sold for a whopping $500. McDonald’s has taken steps to mitigate speculation by requiring customers to buy a Happy Meal before purchasing an additional toy, and only one additional toy can be purchased per transaction, regardless of how many Happy Meals are purchased.

The Year of Pokemon

It’s been a good year for Pokemon fans and it continues to improve. In early 2022, Pokemon Legends: Arceus was released, which took players back in time to the Hisui region, where they could learn more about the mysterious history of Pokemon. Players can also expect Pokemon Scarlet and Violet in November, which will be the last major entry in the series. In the Paldea region, players will discover a new phenomenon called Terastallization, which allows Pokemon to change their shape, and sometimes even their Type. It will be interesting to see how this will affect the battles.
We hope that the restrictions imposed by McDonald’s will provide fans with the opportunity to get their hands on a few of their favorite cards before they are all sold out. Pokemon Card fans can also count on the Halloween-themed Trick or Trade BOOster Bundle, which will be available from September and will include several ghost-type Pokemon such as Gengar, Mimikyu and Polteageist. Some retailers have already been spotted selling special Pokemon kits.