Home Entertainment All New Endemic Life in Monster Hunter Rise: Sunbreak (and what They... 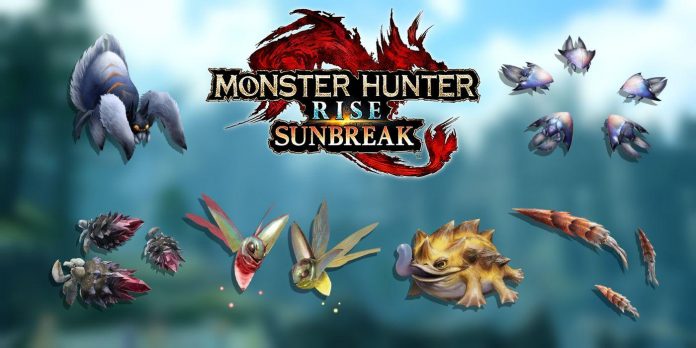 Endemic Life is a set of creatures in Monster Hunter Rise that live in different places and give hunters different effects when detected, and the Sunbreak expansion has introduced seven more into the world. The first is the morphed wire beetle from the Citadel, which appears in two forms: the ruby wire beetle and the golden wire beetle. Both offer bonuses that help hunters while riding a wyvern in MHR, including their own unique time boosts. Ruby wire beetles increase the attack power of mounted punishers, and gold wire beetles increase the rate of material loss during battles mounted on a wyvern.

Next comes the Spider Puppet from the Citadel, a small hunting helper that acts similarly to the spider puppet. Accordingly, Hunters can use the silk of the spider puppet to take control of the monster and direct it in the right direction. This action can damage the beast and even cause it to tip over, which will give players the opportunity to strike.

Another endemic life added to Sunbreak is the stargazing beetle from the ruins of the temple. These beetles stick to walls and surfaces in star-shaped clusters. If the monster crashes into a group of star-shaped beetles, the dust formed from their shells will explode, causing additional damage to the wyvern in “Sunny Dawn”.

The Prickly Toad is another hunting helper that players can find in the Citadel. This little amphibian has an elastic tongue that can cling to monsters and flinch from them. Accordingly, Hunters can use the Prickly Toad as a convenient means of controlling or changing positions during combat. This is followed by Spearsquid, an alluring creature found in the jungle. Like Lampsquid, these cephalopods will swim in squads on the water in certain areas of the terrain. However, instead of strengthening the player, they will deal damage to any monster or small beast in their path.

The last normal endemic life is the jungle cutter crab, a type of hermit crab that will shoot spikes at any large monster that comes too close to their territory. The seventh and final creature is a rare endemic life known as Gargold, a beautiful winged bird—like animal that lives in a hidden place in the Citadel. Appearing only at certain times of the day, Gargold does not give any additional effects, but instead will interact with Hunters in various ways using gestures. For example, if you wave to a Gargold, it will spread its glowing wings and respond with a shrill, piercing greeting.