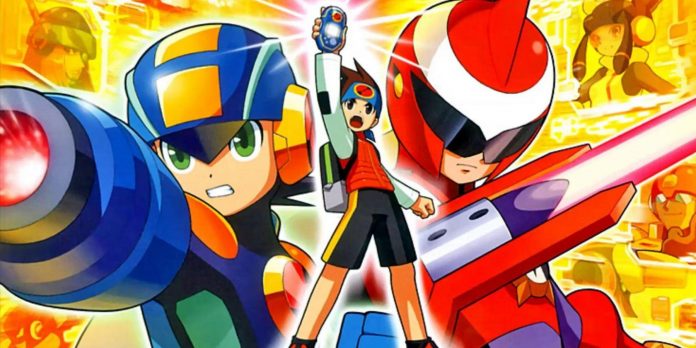 When the recent Nintendo Direct Mini was first announced, there were plenty that felt disappointed at the lack of a full-blown summer Direct with news regarding Nintendo’s upcoming releases like Pokemon Scarlet and Violet and Bayonetta 3. However, despite it being only a ‘partner showcase,’ there were plenty of announcements that got fans excited, one of which was the announcement of a beloved Game Boy Advance series bundle: Mega Man Battle Network Legacy Collection.

Between Cybeast Gregar and Cybeast Falzar are a number of NetNavi differences, whom tend to act as bosses in Battle Network and lead to a difference between Mega Man’s ‘Cross’ capability gained after defeating them. In Cybeast Gregar, players will face Heatman, Elecman, Slashman, Eraseman, and Chargeman which will then provide them with Heat Cross, Elec Cross, Slash Cross, Erase Cross, and Charge Cross, which tend to be more powerful. However, in Cybeast Falzar, players will face Aquaman, Tomahawkman, Tenguman, Groundman, and Dustman before gaining the Aqua, Tomahawk, Tengu, Ground, and Dust Crosses that are more ‘strategic’ in nature.

Possibly the biggest difference between the two games is the final boss that players need to face as MegaMan.exe. Noted as some of the hardest bosses in the Battle Network series, players who picked Cybeast Gregar went up against Gregar, while those with Cybeast Falzar faced Falzar. Gregar had an AOE effect that triggered every time it moves, causing rubble to fall on the panels surrounding the player. Falzar, on the other hand, didn’t have any panels underneath it, so any panel-focused Chips such as Crack Shot had no effect.

One of the best things about the Battle Network series is how Capcom showed that growth is possible within the Mega Man franchise through the addition of new gameplay mechanics. Once players defeat either Gregar or Falzar, they will unlock ‘Beast Out’ which is exclusive to Battle Network 6 that occurs when Mega Man absorbs a Cybeast. Both versions of Beast Out will give +30 to non-element and non-dimming Chips, allow Mega Man to auto-target the closest enemy, and grant him Gregar or Falzar Claw, which is a ‘double-claw slash’ that occurs after charging a non-elemental chip that has 60 damage and increases by 10 for each additional Buster attack.

As ‘Gregar Beast,’ Mega Man will gain armor called Spear Armor which gives him immunity to flinching. In this form, his Buster attack will also change into a rapid fire attack via the Gregar Buster. Within this Beast form, Mega Man can still use Crosses which then turns him into Heat, Elec, Slash, Erase, or Charge Beast depending on the Cross with each Cross Beast form featuring their own Cross Beast Special Move.

Transforming into ‘Falzar Beast’ gives Mega Man both Air and Float Shoes, which creates immunity to panel types and allows him to move over holes without damage penalties. This form will turn Mega Man’s infamous Buster into Falzar Buster, which shoots a fast spread that spans down the row he is standing on plus two columns above and below him. As Falzar Beast, Mega Man can utilize Crosses to turn into Aqua, Tomahawk, Tengu, Ground, or Dust Beast and gain their respective Cross Beast Special Move.

Some of the best chips in Battle Network are its most powerful ‘Giga Chips’ which are capable of unleashing devastating attacks and effects during battle. Players with the Cybeast Gregar version will have access to these Giga Chips:

Those who chose Cybeast Falzar will instead gain access to the following Giga Chips: