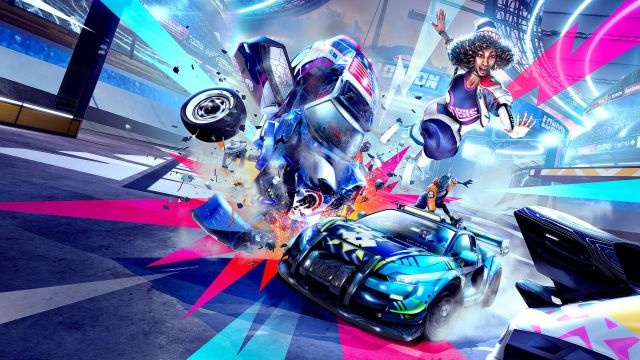 This is Destruction AllStars, a frenetic multiplayer that we will be able to download completely for free from February 2 with PlayStation Plus.

We discovered it for the first time last June 2020, in a first look at the first-time catalog of PlayStation 5, being presented as an exclusive to the new Sony console. Later, when the price increase for these launches was announced, we doubted the success that a proposal like Destruction AllStars could have, but wisely, the Japanese company rectified. In this way, next week we will be able to download this frenetic multiplayer with influences from others such as Rocket League or the classic Twisted Metal, for example, completely free if we are subscribed to PS Plus, in a twist that can give this title a first boost to by Lucid Games, but… how do you play Destruction AllStars?

Destruction AllStars is primarily a driving video game, although we have seen characters on foot touring the circuit, and it invents a futuristic competition in an attempt to capture an important community of players for a future in which others such as Roller will have to compete Champions by Ubisoft. A key aspect will be that of the launch content, which should be sufficient so that the player base that will surely build in the first days does not end up jaded by the lack of it. On the one hand, we know that there will be 16 selectable characters at the beginning, each with their own car, an amount that seems more than enough for a first batch, also counting that there will be different skins for each of them. On the other hand, Lucid Games has also confirmed that there are several circuits, although the exact number has not been specified. As for its game modes, there will be four that we can enjoy from the beginning, hopefully more will arrive as the months go by.

Once in the game, there will be three different types of vehicle, each with its own characteristics and objectives to fulfill. The first of them will be the fastest and with the capacity to make spectacular skids, there will also be a smaller second with the best handling of the three, and a third tank type, more voluminous and specially designed to inflict and receive damage. As we said before, one of the peculiarities of the game is the differentiation between characters, each of them having their own abilities, which are recharged in an energy bar that can increase by doing evasions, hitting other vehicles and collecting items scattered throughout the stage.

Specifically, during the special State of Play of Destruction AllStars that we could see this week, we saw a small glimpse of the special abilities of two of the 16 characters such as Shyft and Lupita. The first, with a defensive tendency, achieved temporary invisibility, while Lupita left a trail of fire behind her to damage her opponents, being able to do so while going on foot or on four wheels. These abilities, among 16 characters, undoubtedly grant a significant variety, to which must be added the inherent and common abilities of each of them such as double jump, running on the walls and more, giving a touch of parkour essential not only to dodge our rivals, but also get score items and new vehicles to continue the competition. The ability of the characters will also grant them the ability to climb on the opponent’s vehicles, being able to sabotage them, direct them towards an obstacle so that they collide or directly, steal them.

Lucid Games also presented a second game mode called Carnado, in which two teams of eight players each compete, and whoever gets the most gears wins. These are obtained thanks to impacts against other vehicles, but you have to take into account the risk of losing them all. The third mode will be Stockpile -also by teams-, similar to Carnado with the exception that we will have three points to control at the same time that we try to steal gears from our rivals, for which we will have to get out of the car after having knocked down the rival. After obtaining them, you will have to deposit them in each of these three specific points to have control of them. The fourth mode they talked about and which will also be available at the beginning is Gridfall, a luck of all against all in which the last contestant standing will win, with the peculiarity that the stage will collapse as the game progresses, being able to launch our opponents to the void, while we will have to show off parkour skills to avoid our own fall. We have a limited amount of lives at the beginning of the game, although more can be achieved throughout the game, and thus fully detail what promises to be the most frenetic game mode of Destruction AllStars.

New OLED displays for laptops on the way

A screenshot showing the features of OnePlus 8 Pro is revealed