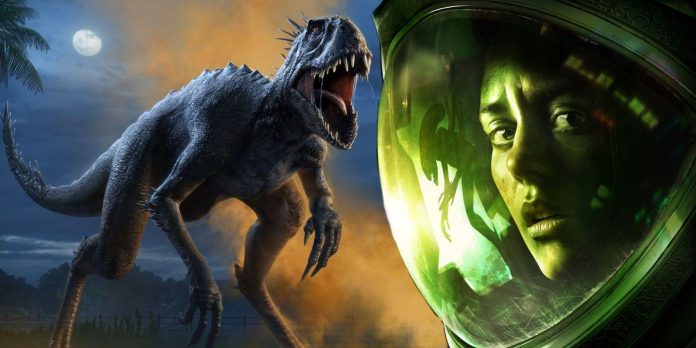 While Jurassic Park games have historically focused on building parks or shooting dinosaurs, the best experience can be found by taking inspiration from Alien: Isolation. The 1993 film spawned a 30-year franchise that ranges from sci-fi thrillers to disaster action movies, and related IP-based games also vary greatly. Despite this range, few games come close to the themes and tone of the original film.

The earliest Jurassic Park games for home consoles were traditional adventure games loosely based on the events of the movie. Unsurprisingly, dinosaurs are the most common enemies, and the player is often provided with weapons (sometimes a tranquilizer gun) to fight them. This is in stark contrast to the thriller tone of Jurassic Park, which demonstrated how scary tyrannosaurs and other dinosaurs can be in a survival horror game. The main characters have little chance to fight — an attempt to shoot dinosaurs failed.

As the franchise has evolved, key changes have taken place in it. Dinosaurs have always been stars, but in Jurassic Park they were used sparingly for maximum enjoyment. By turning dinosaurs from a threat into something to protect and introducing a traditional villain, The Lost World has created a status quo more suited to action games. Later films have followed suit, and the tone of the thriller has been left behind in both games and movies. The game “Jurassic Park”, which corresponds to the spirit of the 1993 film, may never appear, but another film that masterfully creates tension and rationalizes its monster can give answers — “Alien”.

Alien: Isolation shows how to make a game in Jurassic Park

The Alien movie and its sequels followed a remarkably similar trajectory to Jurassic Park. For both, the sequels dramatically changed the tone and even the genre of the franchise. James Cameron’s “Aliens” is a sci-fi action movie, whereas the original is pure horror. There are many video games about Aliens, but they are not suitable for the original film, since most of them use marines from the second film and are opposed by hordes of xenomorphs. Against the background of all this, Alien: Isolation 2014 stands out. Stealth horror survival is the best alien game in which there is only one alien, almost immune to damage. Instead of shooting bullets at him, the player is often forced to be creative, and in case of failure, he spends a lot of time running and hiding — just like Ripley Sigourney Weaver and the entire cast of Jurassic Park.

Most video games are empowerment exercises in which the player explores a fantasy in which he has freedom of action beyond his daily norm, but Alien: Isolation and other great survival horror games deprive the player of strength. Atmosphere, pace, and dramatic timing are key factors, and with the right approach, they can provide escalating tension and bursts of excitement that even surpass those in typical action games. The moments when the Xenomorph is not on the screen in Alien: Isolation can be more stressful than when it is. He doesn’t even appear after almost two hours of the game; the environment is created in such a way that it can appear from almost anywhere, and the player spends quite a lot of time hiding behind furniture or in the dark. In short, just knowing that there might be an alien somewhere is very scary.

While the developers of Alien: Isolation are creating a new shooter with a completely new intellectual property, this plan, which works so well for Alien, can be easily applied to the original Jurassic Park. The film has only 15 minutes of a dinosaur on the screen, and the two main threats — a tyrannosaurus and a pack of three velociraptors — cannot be effectively fought, you can only run away from them. The combination of dark, rain-drenched exteriors and indoor industrial spaces will set the perfect atmospheric tone, and there is a similar threat level from a velociraptor from Jurassic Park and a xenomorph. He’s a little bigger than a human, much faster, and if he gets to you, he’ll kill you. Jurassic World: Aftermath has already done this, albeit on a virtual reality scale, and works as a proof of concept. A sequel to Alien: Isolation would be fantastic, but it’s also possible that the developer could approach the Jurassic Park game with its concept.