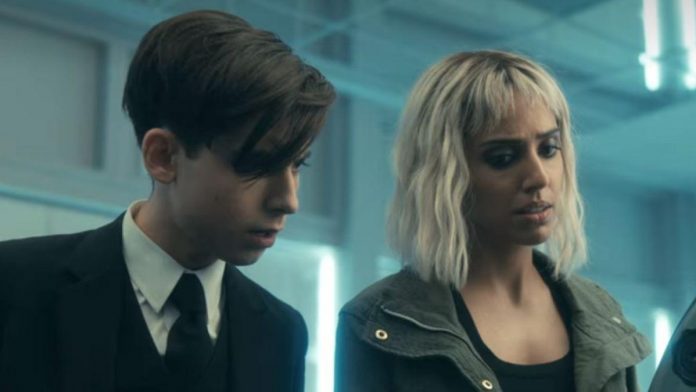 Major spoilers below for Season 3 of The Umbrella Academy, so tread carefully between the timelines if you haven’t yet watched!

With its highly anticipated return to Netflix subscribers around the world, The Umbrella Academy Season 3 kicks off with a glorious whirlwind of a hallucinated dance-off set to Kenny Loggins’ “Footloose,” which pretty much meant all bets were off for what the rest of the season might deliver. (With “Total Eclipse of the Heart” karaoke absolutely being packaged in there.) So it was only natural to watch as Five and Lila’s respective and combined storylines included her falsifying parental guidance over a kid who ends up being wiped out of existence, as well as meeting an old and iron lung-reliant version of Five just before his death, and arguably the show’s best fight sequence so far, in which one of the characters was nude.

This is what fans have come to expect from The Umbrella Academy — perhaps not so specifically on the nose — and stars Aidan Gallagher and Ritu Arya spoke with CinemaBlend and other press about the chaos wreaked throughout Season 3. So let’s dive into what they shared with me regarding the aforementioned twists and turns.

The Umbrella Academy is no stranger to fight sequences that up the various characters’ superpowers, and the ante is upped in Season 3 thanks to the arrival of the various Sparrow Academy members, each with their own unique abilities. But arguably the season’s best action pop involved minimal CGI powers and a whole lot of clever camera work. The third episode brought the adversarial Five and Lila (in her birthday suit) together for the first time this season with a bathroom brawl for the ages. When I asked star Ritu Arya about the scene, here’s how she started her answer:

I do think he holds his own. Well, originally it wasn’t in the script. And Steve Blackman was kind enough to, well, he’s just an awesome collaborator and always encourages our ideas. And so I felt like something was sort of missing between Lila and Five from where they left off in Season 2. So I suggested, can there be some kind of like battle, or some kind of fight when we first meet? And he loved the idea. So, you know, I was like, ‘She’s not going to put on clothes. It’s not Lila. It’s just like, attack. She’s so uninhibited. She doesn’t care about that stuff, right?’ So it just kind of happened.

It’s good to know that nobody wrote that scene ahead of time and just expected Ritu Arya to automatically be game to take part in a choreography-filled sequence in any state of undress. So power to her for helping bring it to life with her own ideas. That said, it’s a whole different thing to conceive it than it is to put it to practice. But they figured out a best-case way to throat-punch two birds with one fist, as it were, through the planning stages. Arya continued, saying:

And then afterwards, I realized sort of the logistics of that, because, you know, they can’t show anything. . . . So in rehearsal, we had the camera with us to try and figure out what could we actually film, and what moves would work given those restrictions. And I think it worked. It was really a lot of fun. And that scene in particular on set kept getting pushed just because of scheduling. So it meant that we kind of got to add a lot of stuff, so it became like a bigger thing than even originally, I think, it might have been. And they loved it, so they kept it in. We had a lot of fun filming that.

Aidan Gallagher shared his take on the fight scene after his co-star was finished, and they agreed that it ended up becoming both of their top fight sequences so far.

It’s probably like my favorite fight scene I’ve ever filmed. I think it has like the most real moves in it, too. Like all the stuff you see is actually stuff that would be used in a combat scenario.

Beyond whatever titilating reasons why Lila and Five’s fight is memorable, one of the coolest things about it is how precise the moves and edits work specifically to avoid blatant nudity. It’s a weird skill to be applauding, but applaud it I shall.

Aidan Gallagher On Five’s Rage Against His Older Self

With Season 2 having already put Five in the midst of his own paradox psychosis as the Kennedy assasination was going down, The Umbrella Academy Season 3 somewhat quickly delves into the concept of the grandfather paradox as a way of explaining the universe-sucking kugelblitz. So what better way to end Five’s mini-quest for answers in Episode 4 than for his Operations Bunker discovery to be yet another version of himself? Only this time, the other version was far older, on death’s doorstep and possibly even more distanced from empathy. It was hard to tell whether he was purely being hopeless or deviously cryptic when he told Five not to save the world, considering the way everything played out.

When I asked Aidan Gallagher about meeting up with an even bigger jerk Five for that sequence, he spoke quite a bit on the inherent angst and aggression forever building up within his character, saying:

Well, I think that has to do with a lot of self-hate that he has. Yeah, he doesn’t like who he is, but he is quite a malicious entity who is sort of grounded in his family ties and wants to sort of resolve the trauma of his youth, which is the fiery apocalypse he was forced into growing up in. So that, coupled with the love for his family, is what ultimately makes him a good person, but yeah, he’s quite a vicious being. Meeting another version of himself is, most of the time, frustrating, just because his personality has a lot of friction in it.

Ideally, Five would be able to settle down in a quiet spot with occasional access to the family members that annoy him the least, and the apocalypses would cease. But ideals don’t really exist in this universe, so Five is left to deal with himself, and he hates it. According to Gallagher:

With this particular instance, he’s giving himself advice. And there’s no other thing [besides Older Five] that you can turn to with this ultimate threat of the kugelblitz and not having a solution for it, that to hear himself say, ‘Don’t do anything,’ is so infuriating. This is supposed to be a future version of himself helping that version of himself exist. Like, ‘You: help me out. Give me something here.’ There’s a lot of rage in that particular meeting, and it’s not even having to do with the paradox psychosis thing of just the two Fives being next to each other. It’s just the self loathing, I guess.

Though Five did showcase signs of paradox psychosis by way of some itching, sweating and farting, the symptoms weren’t quite so prevalent, since the younger-bodied version wasn’t motivated to physically confront himself in timeline-altering ways. (I mean, that’s always a back-pocket option.) Aidan Gallagher seemed to read Old Five’s “don’t do anything” advice as falling on the doomsday side of things, as opposed to the secretly-world-saving side, so maybe the old grump just wanted to destroy everything before other versions of him reached such a grizzled state. Time is hard.

Now we come to one of the more unexpectedly heartbreaking twists that The Umbrella Academy dropped onto viewers’ laps in Season 3: the disappearance and unexplained fate of Javon Walton’s Stan. While obviously not as tragic as it would have been if Lila hadn’t been lying, and Stan was actually their kid, he’s still SOMEONE’s child, even if the mother was prone to leaving him alone while she shacked up with musicians. So that’s a whole conversational avenue all on its own.

But here’s the conversation Aidan Gallagher and Ritu Arya had amongst themselves when I asked the actress if, at least in her mind, Lila and Diego would attempt to find Stan wherever he is.

Ritu: In my heart, I think, yeah, like, they must. We fell in love with him, you know? He’s such a cool character. It’d be sad to just let him be disappeared, but also, it might not be in their control. He’s not the only person. Aidan: We don’t know. They haven’t told us. We don’t know what happens if we get like a Season 4. They haven’t all figured it out.Ritu: That’s why I say, in my heart, I want that. Because I was kind of shocked even reading the script. Like, ‘Where is Stan? Is he coming back?’ And then the season ended, and I was like, ‘Nope.’ We never got to conclude finding him. But also, we’re in this funny transition phase where we’ve just ended up in this area, we don’t have our powers, and we’re gonna have to figure out what’s next.Aidan: It’s quite a move though, like when he disappears. It’s just like a punch to the gut, it feels, watching it, because you’ve come to love this character. Ritu: It’s also the end of the world. So I think that there’s a lot of things to be kind of concerned about anyway.

Obviously no one knows what the future holds for The Umbrella Academy as far as a potential fourth season goes. But considering it’s been at the #1 spot in Netflix’s daily Top 10 since its release, which dethroned Stranger Things’ Season 4 reign, I wouldn’t be the least bit surprised if a renewal announcement is imminent. But will it contain any information regarding Stan’s whereabouts? No, not unless the announcement comes from another timeline’s Netflix where press releases give away information like that.