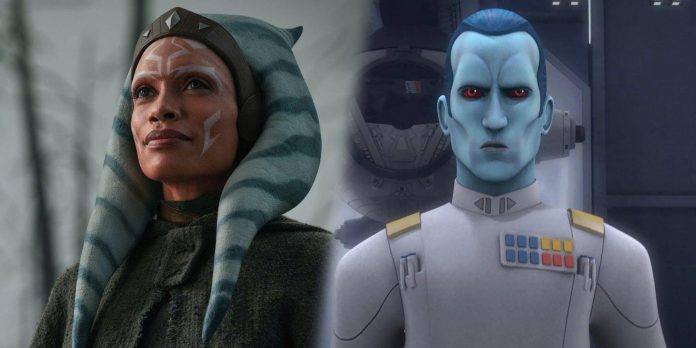 In any franchise, especially in “Star Wars“, there are predetermined conclusions. Fans will assume certain things even without explicit confirmation, just based on how pointless it is to not correspond to reality. In many cases, these assumptions tend to be related to the long-awaited debut or return of fan-favorite characters, and Rosario Dawson’s series about Ahsoka seems to be no different.

In particular, this example refers to the strongly implied appearance of Grand Admiral Thrawn in the upcoming Star Wars series Ahsoka. After the character played the main role in the animated series “Star Wars: Rebels” and received wide recognition in “Mandalorian”, it got to the point that now it would probably be a big surprise if he did not appear in “Ahsoka”. But so far the idea has not progressed beyond rumors and serious consequences. However, that may have just changed.

Appearing on a panel during the Chicago Comic & Entertainment Expo, star Ahsoka Dawson offered some tempting words to hungry “Star Wars” fans. One of the questions asked was, “Where is [Thrawn]?” Of course, she could not say anything specific, but her answer seemed very eloquent. “This dude, dude… incognito,— Dawson said with a sly grin before toying with her answer. “Maybe we can get the Scarlet Witch to help us, she can jump through the multiverse, right? Come on, girl! Yeah, I mean, it’s a really important giveaway in [Mandalorian] about what my show could potentially be about… Obviously, we’re really trying to track down [Thrawn], so we’ll see what happens…”

At the very least, it confirms that the search for Thrawn will play a significant role in the history of Ahsoka. With Dawson as the titular former Jedi along with Natasha Liu Bordizzo as Mandalorian warrior Sabine Ren (and Mary Elizabeth Winstead in an unknown role), this duo is certainly a force to be reckoned with, and it should make even Thrawn think. Perhaps her comment about the “multiverse” could also be a clue, since Thrawn was last seen being thrown into hyperspace by Purgill creatures in Star Wars: Rebels. Such an unknown force could go beyond the dimensions. Naturally, this could also be a passing comment by Dawson.

But apart from Thrawn, there is also the Ezra Bridger problem that needs to be dealt with. As one of the main characters of Star Wars: Rebels, Ezra left with a bang, provoking Purgil to jump into hyperspace on both him and Thrawn in the finale, while saving the rest of his team. Since then, Ahsoka and Sabin have been searching for Ezra, and obviously finding Thrawn is their main goal. The probability of both characters appearing in “Ahsoka” is so high in the minds of fans that many assume that the star of “Aladdin” Mena Massoud and Lars Mikkelsen from “The Witcher” have already secretly signed up for the roles of Ezra and Thrawn, respectively.

Anyway, it will almost certainly become clearer the closer “Ahsoka” is to the premiere. This is already one of the most anticipated Star Wars projects since the Mandalorian, so speculation will continue anyway. But we hope that fans will soon get some information as a treat.

The premiere of “Ahsoka” is scheduled for 2023 on Disney Plus.