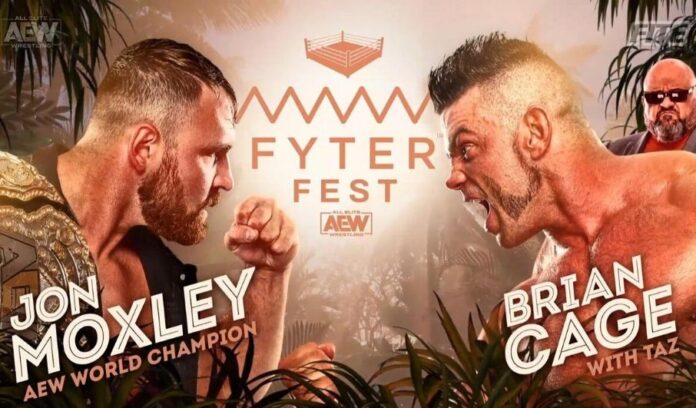 During the broadcast of AEW Dynamite, via TNT Drama, it was confirmed that Fyter Fest will take place on July 1-8. This time, instead of hosting a pay-per-view event, they will air for free as Dynamite Special Editions in two weeks.

So far, the only confirmed matches for Fyter Fest are a title defense of AEW World Champion Jon Moxley against Casino Ladder Match winner Brian Cage, and it was recently confirmed that Kenny Omega and Hangman Page will again defend the Tag Team Championship against the members from The Best Friends Chuckie T and Trent.

AEW Fyter Fest, 2 nights on @tntdrama! I’m excited to bring Fyter to @AEWonTNT on July 1 + July 8. Thank you to all of the great fans who’ve supported our pay-per-view shows and #AEWDynamite every Wednesday night! This one’s on the house! Or these two rather.

At a press conference, Tony Khan stated that Fyter Fest was originally scheduled to take place in London, but the pandemic, caused by COVID-19 (Coronavirus), prevented it from taking place outside of the United States. Plus, it’s not the first time that one of his pay-per-view events has become special to Dynamite. It happened with Bash At The Beach and before the pandemic Blood & Guts was going to be highlighted, but it was canceled indefinitely.