Home Entertainment Aespa Said That Their Future Goal Is To Sing In Front Of... 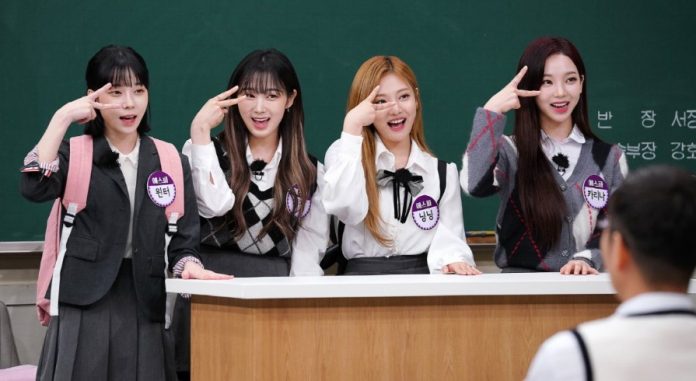 Aespa Said That Their Future Goal Is To Sing In Front Of An Audience. After Debuting During The Ongoing COVID-19 Pandemic, The Girl Group Has Never Performed In Front Of Fans.

Today, Saturday (23/10), aespa appeared on the ” Ask Us Anything ” program for the second time. Here, the 4-member girl group talks about their closeness and how they first joined SM Entertainment.

Winter shared that he had been nicknamed “Kim Min Kyung Hoon” in high school because of his resemblance to Min Kyung Hoon . “They say our eyes are similar,” said. Min Kyung Hoon said, “I think I looked a bit like him when I was younger.”

aespa also talked about how close they are as a group, often sharing outfits between them. Super Junior’s Kim Heechul joked, “If that happened to me, I would leave the group.” Seo Jang Hoon asked if they would also share a special meal if their own mother left it at the dorm, and Karina said, “If it’s something that anyone can eat, then we tell everyone beforehand.”

Ningning said, “There are times when it’s uncomfortable because we always share something.” According to Giselle , Ningning has an awkward side and always spills coffee at least once a day. Ningning said, “I’m wearing Giselle’s clothes and I feel bad spilling food on it.”

Karina also shared the story of how she was cast at SM Entertainment. She was popular on social media when an SM representative sent him a direct message (DM) with a casting offer. Karina said, “I thought it was a scam. They said they were interested in me after seeing my photo and asked if I was interested in becoming an idol. But they didn’t tell me which agency they were from. So I obviously declined. A few months later, I got a casting offer from someone who different. In terms of messages, I was offered twice.”

Ningning recounted how she became a musician saying, “I was five years old when I first went on stage. There was a stage set up in a large shopping mall, and my mother told me to try going up there. I went on stage. There without a second thought. Only then did I know I could sing well. After that, people looked for me to perform.”

About their childhood dream, Ningning said, “When I was young, my dream was to become a singer.” Karina said her dream was to become a flight attendant, and Giselle said, “I want to be an actor as well as a fashion designer. “Then one day I suddenly thought that I wanted to be a singer.” Winter said, “There are a lot of soldiers in my family. But I’ve always loved singing and dancing since I was little.”

aespa said that their future goal is to sing in front of an audience. After debuting during the ongoing COVID-19 pandemic, the girl group has only ever appeared in front of camera directors and production staff members and never had the opportunity to appear in front of their fans live, Karina said, “I imagined it before and I thought I was going to cry.”

House Of The Dragon Will Finally Dispel the GOT Any Misconception

Hello, Goodbye & Everything in Between Review: YA RomanceCharms & Disappointing