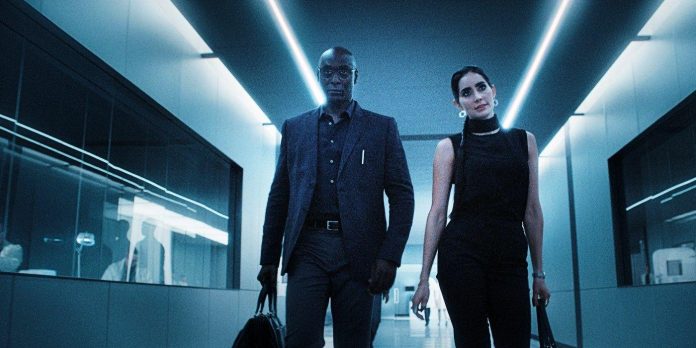 Paola Núñez and Adeline Rudolph play the daughters of two iconic characters in Netflix’s Resident Evil show. Rudolph is the older version of Billie Wesker, the daughter of Albert Wesker (played by Lance Reddick in the series), while Núñez is Evelyn Marcus, the daughter Dr. James Marcus. Resident Evil takes place across two timelines, one in 2022 and the other further into the future, both of which follow the tale of two sisters – Billie and her twin, Jade.

The 2022 timeline follows Jade and Billie as they live in New Raccoon City, an Umbrella company town with a plethora of secrets behind its utopian facade. The future timeline reveals that this façade was disrupted at some point in the intervening years of the two timelines, but both Billie and Evelyn have lived to see the dystopic future that they may have helped create.

Related: Which Games Will Netflix’s Resident Evil Flashback To?

Screen Rant spoke with Rudolph and Núñez about Resident Evil, including how fun it was to play two of the series’ villains, Evelyn’s irredeemable act at the end of season 1, and what they hope for the future of their characters.

Screen Rant: Adeline, I love Billie’s big reveal at the Brotherhood compound. I love a good villain, and it looks like you’re having so much fun in the role. What was it like to dive into this role?

Adeline Rudolph: Oh my gosh, it was incredible. That was a really long scene, it was actually my first day on set. So it has a special place in my heart now. It’s been incredible. I feel extremely lucky to be a part of the franchise and to be able to create a new character with the help of us understanding that she’s the daughter of a very iconic character, Albert Wesker. That’s been also extremely fun to be able to have two storylines and see her kind of shift in personality and demeanor in the future. Yeah, it’s been incredible.

Speaking of daughters of iconic characters in the franchise, Paola, your character is also the daughter of another one. How much research did you do into the lore of the franchise? Are you familiar with the movies, did you dive into the games?

Paola Núñez: I was familiar with the games and with two of the movies, but I did gather all the information on Evelyn’s father so I could understand. And it was easier to understand where she’s coming from, and the urgent need to be seen and respected. I feel that that’s where I found her pain, right. That’s where I found her fears and her pain and that’s how I created her. And it was really important [to] me, for Evelyn to have humanity so people can connect with that and not just to be a villain that is almost not human. I wanted her to feel human and vulnerable, even though that’s the scariest thing for her is to be vulnerable. But we can see the cracks. And I love that. I love that about her.

Adeline, with Billie’s arc, we don’t get a lot of information about that – there’s still a lot of mystery surrounding her character and how she got where she is [in the future]. Were you informed of the arc or did you have to fill in the blanks? Do you know what’s going on if there’s a season 2?

Adeline Rudolph: I think with in terms of what I knew, I got all eight episodes of what was happening. So I kind of had an idea – or not had an idea – I knew exactly what was gonna happen. It was kind of fun to go from young Billie to then adult Billie, bridging the gap and those 14 years, I was also kind of lucky, because in the dialogue, they do kind of insinuate some of the things that happened between her and Jade. And I think ultimately, the parts that we do see from adult Billie are very kind of focused on the sister relationship that she has with Jade and how that has changed. But also, her perspective on how to change the world and how that very drastically differs from how Jade wants to change the world. I’m very excited to see where this all goes, what Bilie’s intentions are moving forward. But it’s been very exciting, being able to kind of just show that little switch and also play around with Billie’s emotion as an adult towards Jade. I feel like we get to see a couple of different nuances coming from her in their conversations.

Speaking of moving forward, we get a pretty irredeemable moment from Evelyn at the end of season 1 and then we get to see her in the future as well. Do you think there’s any redemption for Evelyn, or do you think she’s gone down the river of villainy at this point?

Paola Núñez: Honestly, I just hope we see another side of her. This has to change her right. She gets to see the horrific consequences of her actions. She provoked all of this. This is almost her fault, what we see in the future. So I would like to see a different side of Evelyn, maybe a redemption, I don’t know. Maybe she’s worse then. I don’t know. I don’t know. But I find that really interesting. I would love to see that happening for her.

Year 2036 – 14 years after the spread of Joy caused so much pain, Jade Wesker fights for survival in a world overrun by the blood-thirsty infected and mind-shattering creatures. In this absolute carnage, Jade is haunted by her past in New Raccoon City, by her father’s chilling connections to the sinister Umbrella Corporation but mostly by what happened to her sister, Billie.

Check back soon for more interviews with the cast and crew of Resident Evil, as don’t forget to read our interview with composer Gregory Reveret.