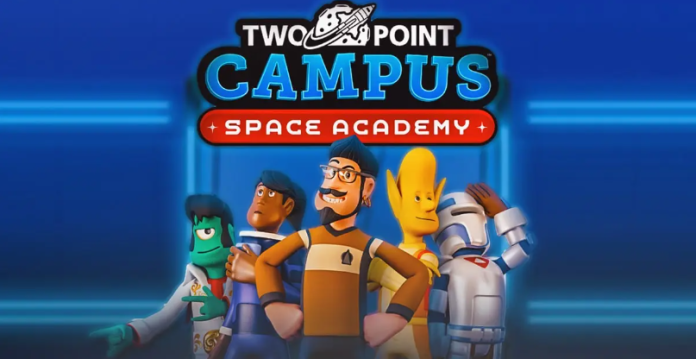 The new Two Point Campus DLC, Space Academy, adds courses and campuses that are out of this world, pun intended.

Space Academy of the two-point campus

The Space Academy add-on adds as many as three levels to the game: Universe City, Cape Shrapnull and Cheesy Heap: Delta-Rye. These levels can be unlocked in the main game mode one by one by getting at least one star in Freshleigh Meadows, Piazza Lanatra, Mitton University and Nobelstead.

If you want to dive into the extraterrestrial action right away, the maps are available in challenge mode.

“It’s not a college without a party, and students will have ample opportunities with new events, such as hosting a sci-fi convention at your student union, watching the cosmic king of rock and roll, or joining a brand new club with a turn in time. Two Point Campus is a charming university management simulator in which players must build and manage the university campus of their dreams. From designing stylish dormitories to creating decorative paths and gardens, players are given the freedom to upgrade their campus with new and easy—to-use creative tools to create their own educational masterpiece.”

City of the Universe

To revive the district’s interest in space, step by step.

Universe City is the first stage of the three that becomes available, but it doesn’t carry any bumps. You will be greeted by an old seedy Two Point Space program and a huge debt that you need to pay off. Course fees and living income are also limited to increase students’ interest in space.

“Read a classic astrology course on campus and talk about space expansion… about the future of internal space travel! Upgrade the facility with research and explore a new type of meteor that has started falling from the sky.

Expand quickly and use your marketing resources to reach the moon! Design your cheese mining course to retain students, but beware of the environmental and mental consequences of moving to the moon…”

Fortunately, a new way to make money is being introduced in the form of research that can be conducted at Reasearch Labs and with the relevant teachers and students of Cosmic Expansion. Asteroids will also fall on the campus, which can be mined by trained cleaners and sold for additional income.

The plots also do not require money to unlock, but require the completion of plot tasks.

Universe City is a great introduction to the new mechanics that you will encounter while playing Space Academy DLC. It also carries the right amount of mechanics from the main game and is a great jumping board before you dive (or launch) into full-fledged space.

Take over the management of the newly founded Two Point Space Academy and prepare for contact with aliens.

The main goal of the second level of DLC is to create a buzz around the new Space Academy. The income will come from sponsors who pay you depending on how much fun the students have inside Cape Shrapnull. In order to attract as many students as possible, they do not pay tuition fees.

“After your success at the Space Institute, the developing Two Point Space Academy needs your help at the forefront of galactic defense and interdimensional diplomacy.

The newly opened Space Academy has struggled to get word of mouth, and more of these mysterious space rocks are falling from the sky. Develop the industry and prepare the county for life abroad. Aliens are coming: look, you’re busy.”

This will introduce the Space Knights School, which “trains the next generation in accurate (as we assume) simulations of intergalactic diplomacy, spacecraft control and warfare.”

Although this level doesn’t introduce as many new mechanics as Universe City, it will add new events to help entertain your students. This includes a sci-fi convention and a new singer you can book during the school year, as well as space duels for some action.

The asteroids in Universe City will also return, but this time it will require quick action from your janitors. Meteors landing on Cape Shrapnull are dangerous and contain meteor ticks that can make your students sick.

Cape Shrapnull plots are scattered and can reduce your effectiveness during the game. That’s why teleportation platforms are being added at this level — so that your students can keep up on time.

Attract students from all over the galaxy to study on the surface of a huge space rock.

Finally we got into space. Cheesy Heap: Delta-Rye is set on a large space rock and filled with cheese. Non-human students will attend your Academy, and you should also bring them to and from your campus.

“We found a cluster of these mysterious space rocks stuck in the orbit of the district, some of them larger than a university campus. If the small ones were valuable, imagine how much the big ones cost! They’ve already attracted quite a few alien fans.

Create the first Two Point campus outside the county, meet alien life forms and teach them everything we know about us. It may be hard to find students from all over the galaxy, but hey, that’s never stopped us before.”

There are two courses at this level: humanities and cheese making, each of which requires unique rooms. The first is dedicated to learning what it means to be human, so you need to build them a simulated living room, and the second is to learn how to collect cheese and process it in a crematorium.

As for getting your students to class, you need to purchase shuttles. They are very expensive and that means you can accommodate fewer students. Fewer students = less income, so make sure everything is balanced.

This level assumes that you have mastered all the new mechanics, as they will all be in full swing. Financial problems from Universe City and dangerous meteorites from Cape Shrapnull will bother you at this level, which makes it one of the most difficult on the Two Point campus.

In total, Two Point Campus: Space Academy presents six new courses that open two at a time. Each of them also requires a special

A field not limited by gravity and common sense. Astronauts disregard traditional beliefs and sail off into the ether. You may not like it, but you will say that you are probably a Capricorn.

From generation to generation, the residents of Two Point looked at the stars and thought: “Someday I will own this.” Thanks to alarming technological advances, this is now a very real and regrettable possibility. Go to the moon and back to get a level of personal discovery that most students can only hope for metaphorically.

Life in space is not just about shooting stars and dodging lasers. You have a lot to learn before you are ready for an intergalactic relationship.

A nomadic offshoot of traditional (land-based) chivalry. Nothing tests your bottle like an infinite void, let me tell you… it really separates the real space knights from the absolute zeros.

Countless alien civilizations have studied humanity during our relatively short existence, but most of them have so far kept a safe and understandable distance! Yes, the alien students are tired of the rumors, they want unfiltered lukewarm humanity right from the tap. I suppose we are experts, but where to start?

Aliens are not so different from us… They get tense when the phone rings, and just love to eat cheese. They have already started collecting cosmic cheese in the galaxy. So, grab the flag and go ahead… Space is the next frontier for us to squeeze out of its natural resources (mmm, natural resources)

The Two Point campus was originally launched on August 10, 2022. The Two Point Campus is available on PC, PlayStation 4, PlayStation 5, Xbox One, Xbox Series X|S and Nintendo Switch. Tempo Academy was launched only in early December and is the first downloadable content for the game.