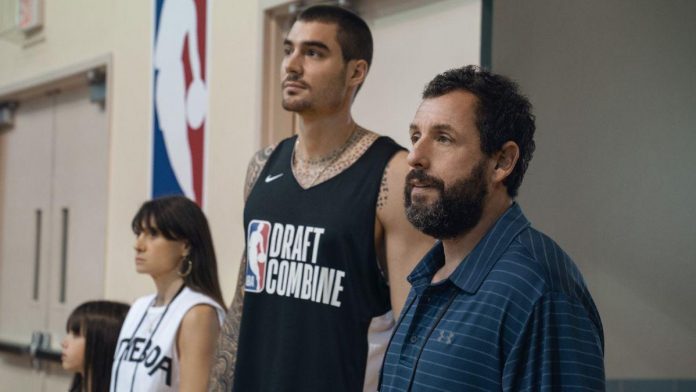 Adam Sandler’s Hustle has made a strong impression since it appeared on Netflix last week. Basketball drama combines strong acting, clear leadership of Jeremiah Tan and sincere respect for the sport. Therefore, it is not surprising that the film received rave reviews from critics. Those who regularly watch films about sports, most likely, noticed that the usual plot moves related to the genre are used here (training montages, the final game of fate, etc.). Although these elements are more than obvious, some may not have realized that Tan also borrowed a lot from a certain Martin Scorsese movie.

While Jeremiah Tan used some familiar (but effective) techniques, he explained to his own CinemaBlend ReelBlend podcast that he understood something at an early stage. He said that he didn’t have an exact cinematic model that he could rely on to create the story he wanted to tell. He and his team watched basketball footage, but interestingly, they also started watching boxing movies. And if you are familiar with the works of Martin Scorsese, then you can probably guess which of his films played an important role in this case:

There was no model. There were no perfect basketball images. We have watched a lot of documentary material. We watched Dr. Jay at Rucker Park and we watched a lot of street games. And then we started watching boxing movies. And the boxing movies are beautifully shot. And that’s because it’s simple in terms of action, isn’t it? It’s like one guy versus another guy. It’s one on one. And the camera with them can easily get inside the ring, so you can be very close to the action. Which, as you know, gives the camera a huge number of opportunities to do really special things. When Zach [Mulligan] and I watched “Raging Bull,” we watched “Raging Bull” and saw what Scorsese was doing and how he was developing the language from fight to fight. We started saying, “OK, this is the model for us. This is how we would like to shoot basketball.”

Martin Scorsese’s 1980 masterpiece tells the real story of Jake Lamotta, a talented boxer whose tendencies to self-destruction negatively affect his professional and personal life. Robert De Niro famously played the role of Lamotta and for his efforts received the Academy Award for Best Actor. “Raging Bull” is unique among sports dramas for a number of reasons, but one of them is that it is filmed in such a way that the audience really feels that they are in the center of events.

Jeremiah Tan and director of photography Zach Mulligan acted wisely, taking cues from the acclaimed biopic, and this is evident in their film. Whenever Juancho Hernangomez’s Beau Cruz works his magic on the court, the camera zooms in on him. This is the main reason why his matches with Kermit Wilts from Anthony Edwards and others are so compelling to watch. (The same camera tricks were also evident during the memorable scene in which Cruz ties her up in construction boots.)

Most likely, Jeremiah Tan will try to use similar shooting methods in his future productions, but his next film will not necessarily have anything to do with sports. Even if that’s the case, he’d still like to pick one of the NBA stars he worked with on his latest movie, and it’s not Anthony Edwards.

Let’s hope that at some point the director will make another sports film. To be honest, I wouldn’t mind almost anything he had planned after seeing his work in Hustle. And if he wanted to take a few more lines from Martin Scorsese moving forward, I wouldn’t be mad at that either.

Hustle is now available for streaming (opens in a new tab) with a Netflix subscription. Follow the release schedule of new films on CinemaBlend to be aware of the main films that are waiting for you.