Home Entertainment Adam Sandler became a father himself, but this week he paid tribute... 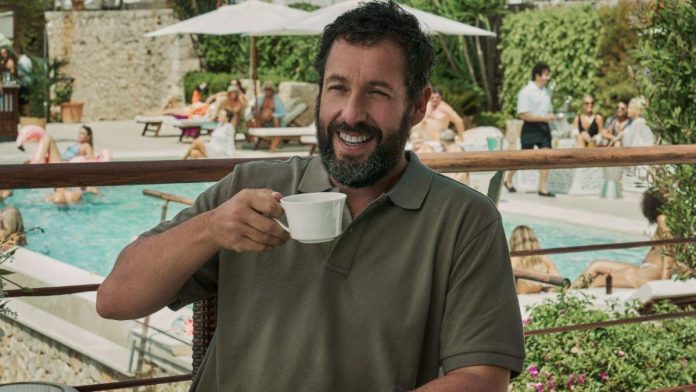 On Father’s Day 2022, millions of people celebrated and paid tribute to fathers and father figures. Adam Sandler from Hustle celebrated becoming a father himself, but for him this special day was also bittersweet. While he was enjoying the day, Sandler decided to pay tribute to his late father this week.

The Hustle actor lost his father Stanley Sandler in 2003 after battling lung cancer. Of course, Sandler’s late father didn’t see what kind of father his son would become. The SNL graduate took to Twitter to remember the fun times when he grew up in the Sandler family.

Happy Father’s Day to all of you, Dads! I had a great one. Every time I heard his footsteps in the hallway, I knew that all the most interesting things in the world were at home. My sisters and brother felt the same way. And my wife Jackie, too. June 19, 2022

The actor’s father sounded like a fun time, regardless of the situation. It turned out that Sandler’s wife Jackie Tyton and his father had a special bond before his death. The comedian continued his tribute by focusing on his father’s influence on every aspect of his life.

I loved every meal, car ride, watching TV, late night conversation, phone call, day at the beach, boat ride, practice field, baseball, and huge family hangouts we had. He loved my wife very much, and she treated him the same way.

Knowing that his wife and father share mutual love and admiration, it was very warm. What made their relationship even more bittersweet was that the couple got married just a few months before his passing. Unfortunately, Sandler’s father never managed to meet his two granddaughters, since the eldest daughter Sadie was born in 2006, and Sunny in 2008. The actor of “Happy Gilmore” told how he and his wife keep the memory of their father for their children.

We talk to our kids all the time about how damn cool and smart he is, and what he would say in certain situations if he were here. I miss this man every day and thank him for his warmth, his love for my mom and the fact that he always puts his family first.

Sharing a sweet and sad message, Sandler shared photos of his late father when he was with his family. The elder Sandler was part of important moments in his son’s career.

The Hubie Halloween star followed up the family moments with new snaps from her late father’s younger days. You can see the similarities between father and son below.

It’s amazing how similar a Hollywood star and his father are to each other. The photos captured the personality and spirit of his father, which, as you can see, was passed on to his comedic genius son.

Before his death, the late Sandler appeared in his son’s 2002 animated Hanukkah film Eight Crazy Nights, voicing the character’s father (of course). His influence went beyond animation when the actor of “Uncut Jewels” dedicated the 2004 romantic comedy “50 First Kisses”. The late engineer’s reach went beyond his son, as his SNL colleague and friend Chris Rock dedicated his special comedy Never Scared to him.

With Father’s Day over, Adam Sandler resumed his busy filming schedule. The actor has many projects planned for 2002, including “Mysterious Murder 2”. In the meantime, you can watch Sandler in the famous sports drama “Hustle” on Netflix, which crushes “Rotten Tomatoes” with a 92 percent “Freshness” rating. While you’re there, you can watch other amazing Netflix movies.