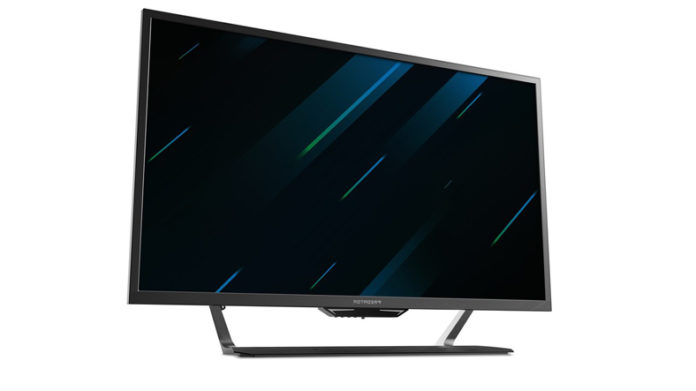 Acer, especially known for its equipment for gamers, introduced its new monitor, the CG 7, which makes its prices so astonishing. Adjusting the brightness according to the light in the room and features such as proximity sensor monitor, the huge size of 43 inches also stands out.

Acer unveils the new CG437K P, the predecessor of the gameplay series Predator. Although we say monitor, in fact, more than a monitor looks like television is not wrong. The full 43-inch monitor also supports 4K video and can achieve 144 Hz screen refresh rate when overclocked. In this way, tearing and distortion in scenes that are quite fluid can be prevented.

Promising to offer a unique gaming experience on this monitor, Acer has added both AdaptiveSync and G-Sync support to the monitor. In addition, the monitor features a VA panel with a wide range of colors that cover 90% of the DCI-P3 color space and reflects colors as closely as possible. In this way, the users enjoy the games, can go to much higher levels.

The Acer CG 7 automatically changes the brightness according to the room’s light:

With a screen refresh rate of up to 144 Hz thanks to overclocking, the Predator CG437K P has a 1 ms response time and a 120 Hz native refresh rate, which is essential for gamers. Also compatible with Xbox One, this monitor also supports variable refresh rate via an HDMI. In addition to the three HDMI inputs, the monitor’s other input ports include one Type-C, two 1.4 DisplayPort, two USB 3.0 and two USB 2.0 ports.

This monitor, which has become more attractive for users with its extra equipment, has two 10 W speakers in it. The monitor also comes with four magnetic LED strips on the back. The CG437K P also has a proximity sensor that automatically wakes the monitor when it is close, and puts the monitor to sleep when the user is away.

This monitor, which can be described as a monster by having many features together, can also say that it deserves its features in terms of price. The Acer CG 7, which is currently listed at $ 1,499 on Acer’s US site, is on its way to becoming one of the most expensive player monitors on the market.