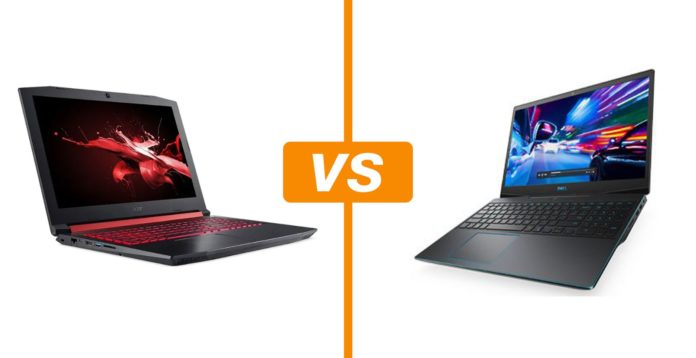 Acer Nitro 5 and Dell G3 are two entry-level gaming notebook options available to buy in Brazil. With prices starting at R $ 3,780 and R $ 4,099 in e-commerce, respectively, Acer and Dell laptops have common specifications, such as Nvidia video card, 15.6 inch screen and Full HD resolution. Despite this, it is important to pay attention to the differences, such as the use of SSD or higher GPU models, such as the GeForce GTX 1660 Ti, for example. Check out more details about the two computers below and find out which one is best for you.

Design
The design on both models follows the pattern found on other gaming computers, with more robust lines, space for ventilation and lights on the keyboard. Despite this, the Dell G3 has a more “behaved” proposal, bringing a black or white finish and blue details, while the Nitro 5 is only available in red and black.

In addition to the look, the weight of gaming notebooks in general is usually a little higher than ordinary laptops, especially because of the more powerful hardware. The G3, for example, reaches 2.34 kg, while the Acer model has 2.7 kg. Another difference is the thickness, 2.68 cm on the Nitro 5, while the Dell PC is 2.16 cm. This can make a difference when carrying the computer in your backpack, for example, but it should not interfere with your daily life.

In terms of interfaces, the Acer product comes with an RJ-45 port to connect to the Internet via Ethernet cable, USB-C, HDMI, one USB-A 3.0 and two 2.0, headphone output and memory card reader. In the Dell option, the set is very similar, with a USB-C, HDMI, a USB-A 3.0 and 2.0, in addition to the card reader. The biggest difference between the two is the lack of the RJ-45 port on the G3, requiring an adapter for cable connections.

Screen
The screen, in both cases, has 15.6 inches and Full HD resolution. In addition, as the gamer point of view the display refresh rate is as important as the resolution itself, it is worth mentioning that the two notebooks offer a frequency of 60 Hz. Dell even promotes a display option with 144 Hz, but the product is not available to buy on the official website.

Performance
The Dell G3 has the latest hardware, bringing the latest processors and graphics cards. The Acer Nitro 5, meanwhile, has recently been upgraded, but is not yet available for purchase in Brazil. So it still brings 8th generation Intel chips, for example, in addition to an older GPU from Nvidia.

Regarding RAM memory, it is worth mentioning the maximum of 16 GB DDR4 available on Nitro 5, against 8 GB on the rival notebook. Although it is possible to perform an upgrade in both cases, this difference may be interesting for less experienced users.

It is worth mentioning that it is possible to find different options for the Acer laptop in Brazilian e-commerce, with changes in memory and also in graphics, including bringing ninth generation processors and GTX 16 cards.

Storage
The Dell G3 offers a good storage solution, with high-speed NVMe SSD. The options are between 256 GB or 512 GB, with the possibility of replacing the card with another disk of greater capacity.

Acer Nitro 5, on the other hand, offers 128 GB SSD with SATA 3 technology, slower than the NVMe used by Dell. The user can also combine the original storage with an HD inside the machine, increasing its capacity. This is especially interesting for anyone looking to save a lot of games, as the game’s files can be large – while the applications themselves open faster on the SSD.

Drums
In terms of battery, Acer is more confident and says that the Nitro 5 should last up to 7 hours away from the plug. It is worth mentioning that the estimate takes into account the moderate use of the computer. But, since the intention when playing is to have maximum performance, this number can be much lower. Dell, for example, did not release an estimate, but only the capacity: the G3 has a three cell battery with 51 Wh.

Prices and versions
Dell brings the G3 in several versions, which vary depending on the processor, in the Core i5 9300H or Core i7 9750H options, and video card. The most affordable model, for example, comes with the GTX 1050, but there are still intermediate versions with the GTX 1650 and the top-of-the-line configuration offers the GTX 1660 Ti Max-Q.

In relation to prices, the minimum value for Dell G3 is R $ 5,286 in the official store of the brand, but it is possible to find the product for from R $ 4,099 on e-commerce, according to Compare TechTudo. The top-of-the-line configuration appears for R $ 7,135 in the Dell store, or at least R $ 6,099 in the online market.

The Nitro 5 is no longer available to buy at the official Acer store, which should bring its next generation soon. Anyway, the product appears in different options in e-commerce. The simplest of them, with 8 GB and Core i5 8300H chip, costs from R $ 3,780, while the more robust version can be found for at least R $ 7,990, equipped with Core i7 9750H and GTX 1650 card.

FarmVille Will Shut Down Tonight