Home Entertainment According to Dev, Root Force is not an arcade shooter, but it... 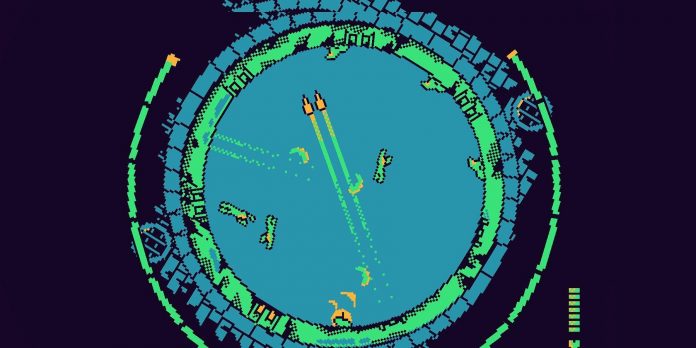 Independent game developer Accidentally Awesome has created his first commercial game in years of intermittent development. RotoForce started as a game jam in 2016 and gradually turned into Anton Klinger’s first full-fledged game. However, the development entailed troubles that the then student could not have foreseen.

The fact that the game originated as a ten-day deadline for participating in a game jam competition influenced all subsequent years of production. It also meant that RotoForce would not outgrow its roots, for better or for worse. It started as a jam for the Game Boy and ranked 12th in overall gameplay under its original name Pixel Soldier. The game changed dramatically after the competition, but had its ups and downs. GameRant talked to Klinger about the genre combination of the RotoForce gameplay and problems in development.

Klinger changed the programming platform before starting to develop his first commercial game. The choice in favor of creating Pixel Soldier with Java was due to familiarity with the programming language and new tools. Tools, including the libGDX game library, helped him achieve his goals faster. After all, the initial product should have been ready in just over a week.

This made the Accidentally Awesome one-person team more efficient, but led to other problems later in the development process. Many of them were not taken into account when participating in the community competition with tight deadlines. Although Java was a very universal language and was supported by many platforms, Klinger realized that game consoles did not have a Java runtime environment. This meant that the game could not be released for consoles unless it was ported to another language, as Minecraft did.

Currently, the plan is to finish the game, then talk to the porting company and release it on consoles. So the consoles won’t be part of the initial release, but it will happen a little later.

This and some other problems became apparent to Klinger at later stages of development. He couldn’t release a Game Boy-themed game on any console, at least not yet. After the completion of Roto Force and its release, plans include bringing in a third party to port it to consoles. When asked about the release dates, Klinger revealed that Roto Force will be available later this year.

Roto Force is a game that combines genres, controls and visual effects in the style of a Game Boy, as well as an exciting dynamic gameplay. Klinger considers it anything from a hell of a bullet to shooters with two joysticks. He drew inspiration from Game Boy games and old-school platformers like Alien Soldier, and was even influenced by the classic arcade game Tempest. However, Klinger says that the game has never been and never will be an arcade game.

The creator of Roto Force does not hate or even like arcade games. It was just a decision that was made at an early stage of development, and it had to be implemented. Pixel Soldier or Roto Force has never had a scoring system or leaderboards. Klinger admits that he could have added combo multipliers and other things to create a points structure, but that’s not the game he wanted to make. According to him, it is necessary to embed a point structure in the game from the very first moment.

The thing is, it’s not really an arcade game, although people say it should be. Initially, it was not conceived as an arcade game, so adding points after the fact, in my opinion, is not a very good idea.

Roto Force still has completion tracking mechanics, so the player has a lot to work on. Each stage ends with a final screen showing the time spent and lives lost. This allows you to have high-speed runs and no deadly runs. It has also added other features to increase the replay value. After completing Roto Force, the player can choose the Ironman mode with one life, the “no movement, only jerk” mode, or even a combination of modifiers.

Accidentally Awesome is soon ready to release Roto Force, after which Klinger enters the post-release stage, where he has to decide what to do next. He has a lot of ambitions and wants to get the most out of becoming a full-time independent game developer. Some ideas include free puzzle games for smartphones that will act as advertisements for commercial games developed by Accidentally Awesome. However, he also considered the possibility of continuing Roto Force.

I already have so many ideas for Roto Force sequels… I don’t think I’ll make a direct sequel to Roto Force right away, but maybe an arcade spin-off.

After almost six years of developing Roto Force, he had a lot of ideas that were not suitable for his first game. According to him, it’s unlikely that Roto Force 2 will be the next big thing, but there may be room for a different take on Roto Force. He mentions that a lot of people wanted Roto Force to be an arcade game, and while that would never have been the case, Klinger sees it as a by-product. It will be an arcade spin-off that will be built from scratch with a scoring system in mind, but it’s still very far on the horizon. Klinger is currently focused on releasing his first commercial game to the general public.

Roto Force will be available for mobile devices and PCs in 2022.