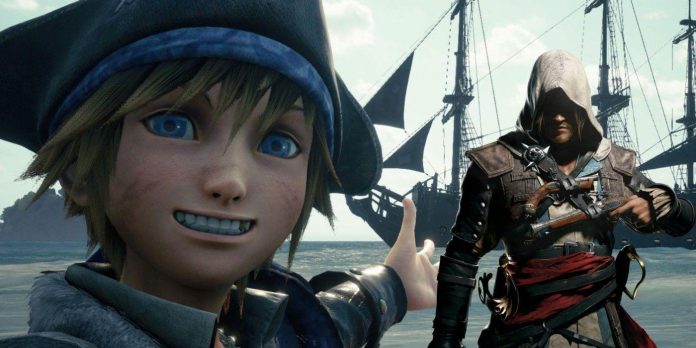 How does Assassin’s Creed: Black Flag compare to the Pirates of the Caribbean segment in Kingdom Hearts 3? The most famous section of the long-awaited JRPG sequel certainly mimics one of the most beloved games in the Assassin’s Creed series, using the world Pirates of the Caribbean: At the edge of the world to sail a ship, getting into fights reminiscent of Black Flag. But how do they compare?

Kingdom Hearts 3 needed to catch up when it came to game design, given that its previous main game, Kingdom Hearts 2, was released 14 years ago. In addition to creative solutions, director Tetsuya Nomura wanted to make changes to the series — for example, in Kingdom Hearts 3 — to reduce the number of characters from Final Fantasy — the series also had to deal with more modern game mechanics and figure out how to implement them in 3. So when it was decided that the Pirates of the Caribbean World would return in 3, it was inevitable that it would come out looking like a Black Flag.

This, of course, leaves the question of which of the two is the best experience. After all, Kingdom Hearts 3 is very different from Assassin’s Creed 4: Black Flag, and these differences carry over to the ship’s gameplay. However, even with that said, Black Flag just has more meat on the bone than KH3, simply because it’s an entire game and not a single segment in a very long JRPG.

Black Flag uses its swimming mechanics throughout the game, to the point that fans wish the main character Edward Kenway would get his own trilogy, like Ezio. Meanwhile, no matter how shockingly deep the Pirates section in Kingdom Hearts 3 was, it was just a section of a larger game. To be honest, Kingdom Hearts 3 explores the concept as thoroughly as possible in this situation, with a separate experience system for the player’s ship, boss battles on ships without a heart, and an easy-to-learn, but difficult-to-master combat system. . However, AC Black Flag has all the execution time to further develop the ship system.

AC Black Flag does the same thing as Kingdom Hearts 3, but better. Not only does his ship control combat and sailing, he uses more of the ship’s strategy and customization, and the ship’s crew also comes into play. Crew members of defeated ships can be hired, each serving a specific purpose on the boat and in battle. Edward can jump on another ship and fight with a rival team and captain, and the player’s ship can even invade military bases.

The Pirates of the Caribbean world in Kingdom Hearts 3 was definitely impressive, being much deeper and more detailed than most fans would expect from a single world in a larger game, but it just doesn’t compare to the game it was clearly inspired by. by Assassin’s Creed 4: Black Flag is one of the best games of this globally successful franchise. Ship battles make the game one of the most unique and outwardly influential in the entire franchise.