Home Entertainment Abuela from Encanto was forgiven too quickly 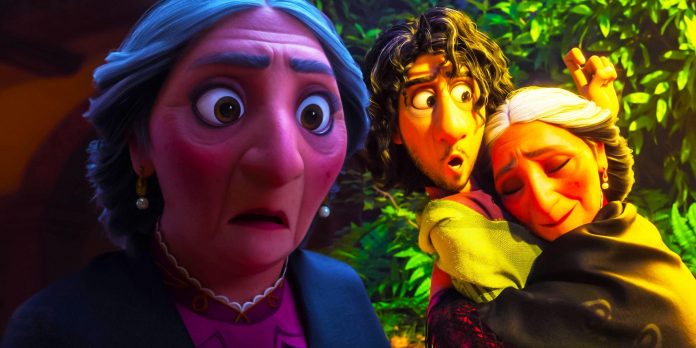 Abuela Encanto perpetuated a serious generation trauma and was forgiven by her family too quickly. Disney’s 2021 animated film Encanto explores the generational power and trauma of the Madrigal family. After Abuela (Maria Cecilia Botero), the matriarch of the Madrigals, loses her husband as a result of a brutal attack on their Colombian village, nature gives her a magic candle that not only creates a shelter, a village called Encanto, for her and her children, but also gives strength or “gifts” to the latter and their descendants.

Encanto’s main conflict is caused by Abuela’s obsession with the magic candle. When her young granddaughter Mirabelle (Stephanie Beatrice) does not present a gift, Abuela essentially rejects Mirabelle from the family; she treats Mirabelle coldly and even forbids her to attend the cousins’ gift ceremonies. When this tension begins to destroy their magical home, Casita, and threaten the existence of the candle (and therefore all the gifts of the Madrigal), Mirabelle reveals a dark family secret: Abuela’s priority over the candle also caused her to reject Mirabelle’s uncle, Bruno (John Leguizamo), who has spent the last decade in exile within the walls of the house. Even Madrigals with gifts suffer from Abuela’s addiction to candles. For example, Mirabelle’s sister, Isabela (Diane Guerrero), is close to marrying a man she does not love in order to maintain the family status of the magical royal family, and Mirabelle’s other sister, Louise (Jessica Darrow), suffers a nervous breakdown from the stress caused by using her gift to help Encanto day for the day. Casita is eventually destroyed by Abuela’s actions, nearly killing every member of the family.

While Abuela is certainly traumatized by Pedro’s death in Encanto and projects her fears of further loss onto her family, the generational trauma she perpetuates should not be easily ignored. She clearly needs to engage in serious introspection and give her family time and space to accept her emotional growth. However, Encanto creatives bypassed what could have been a powerful statement about family healing, and instead decided that each Madrigal either forgave Abuela within minutes of Casita’s collapse, or told her that the disaster was not her fault, or did not even admit his misdeeds. This unnatural ending is a hasty and immature conclusion to an otherwise thematically profound work.

How Abuela compares to other toxic Mother Figures in Disney films

Although Abuela is not a traditional Disney villain, she bears some uncanny similarities to one of Disney’s most insidious bad guys: Mother Gothel from Rapunzel: A Tangled Story. Both Abuela and Mother Gothel feed off their magical relatives to strengthen their self-esteem at the expense of their family’s happiness. Although the magical food of Abuela and Mother Gothel was bestowed by nature as a shining golden gift, now it is perverted by their fears. This uncomfortable parallel between a misguided matriarch and a dangerous villain shows that Encanto needed a serious arch of redemption for Abuela in order not to present her as a villain.

The 2022 Disney animated film “Blushing” touches on the trauma of generations much better than “Encanto”. When the main characters of the series “Blushes”, a mother-daughter couple Min and Mei, sit down to talk about the behavior ingrained in their family after a quarrel in the style of Kasita, Min sincerely apologizes to Mei. She doesn’t expect anything in return from Mei, and in the epilogue, viewers see Ming and Mei working as a healthy team, but still not internalizing bad behaviors. This ending is realistic and authentic. Encanto should have similarly explored work aimed at disrupting toxic family dynamics, instead of jumping from hasty apologies straight to an uplifting, if touching, musical number.

Disney is likely to release a sequel or a spin-off of Encanto, given the film’s positive reception. We hope that such work will address the emotional consequences of Abuela’s actions and the healing process of generational traumas. Then Abuela’s weak atonement arch (or lack thereof) may make more sense in the context of Encanto’s extended narrative.

BTS Expresses Its Feeling Of Being The Most Popular Boy Band...

Battlefield 2042 Will Fill The 128-Player Roster With Bots