Home Entertainment About The “Born Pink” Tour With Its Creative Director: “We could do... 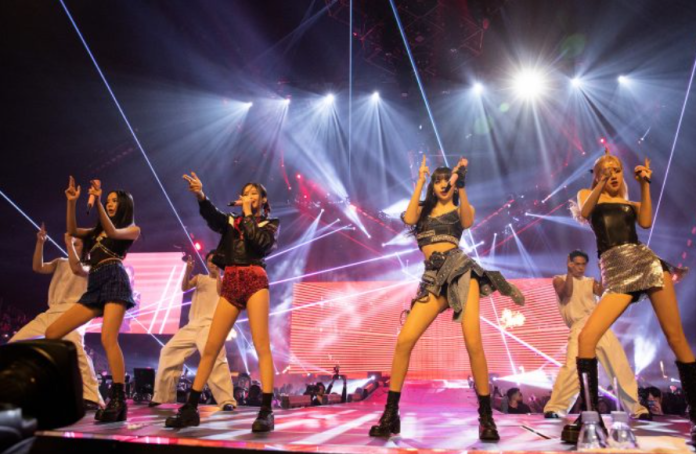 From the very beginning, expectations for BLACKPINK’s “Born Pink” world tour were high. Even before the official announcement in August, the tour in support of the K-pop group’s second studio album was generously announced as the largest of its kind for any female group in the history of K-pop. A month after the start of the tour, the quartet only proved this with powerful performances and impeccable performance. As NME saw firsthand in Seoul, no expense was spared to breathe life into the “Born Pink” tour, from its video recorders with interludes — with themes ranging from a forest paradise to a futuristic sci-fi world — to intricate stage designs and flickering fireworks highlighting the choreography of BLACKPINK.

Amy Bowerman from the creative management and production studio Ceremony London, who has worked with artists such as Dua Lipa and Ed Sheeran, is the creative director of the astronomical tour of the female group, which, after a series of massive concerts in Seoul, South Korea and North America, is finally going to hit the UK and Europe. Bowerman was brought on board to help conceptualize the visual and creative direction of the concert shortly before the release of their single “Pink Venom” in August, so it’s no surprise that she told NME that “it all started with new music.”

Divided into four acts, “Born Pink” is a celebration of everything that BLACKPINK represents. “It’s very airy, very feminine and gorgeous,” says Bowerman about the opening of the concert in the enchanted garden. “Later we move into this extremely monochromatic state, very sharp, black and white and powerful. And for us, these are two sides of BLACKPINK,” she explains. She explains that the spirit of “Born Pink” is to destroy and glorify these sides of BLACKPINK, both personalities and “superpowered artists”.

Ahead of BLACKPINK’s upcoming “Born Pink” concerts at The O2 in London this week, NME contacted Bowerman to find out how she and the female band have revitalized the tour.

How did you and YG Entertainment first conceived the “Born Pink” tour?

“We listened to music with [BLACKPINK] and their producer Teddy [Park], and a lot of it was about finding out what the new album meant to them and what they wanted to achieve on tour. At the heart of it was to take all their new music and all the old favorites to combine them and do something incredible.”

How did the discussions with BLACKPINK and their team develop?

“Unbelievable, the YG team is amazing. They’ve always been with BLACKPINK, so it’s a real family. [The team], the girls, they all have great ideas, and it was a collaboration in many ways. It’s entering a room, talking about what everyone wants to achieve. Not knowing K-pop and not knowing this side of the industry, I was afraid to start. But they were very welcoming and it was a really fun and inspiring experience.”

Was the setlist already determined when you were invited to work on the tour? How much have things like lyrics influenced your direction?

“BLACKPINK really know their audience and what works for them, so they’ve had a lot of feedback on what works and where. They are very well connected with music. They were in charge of their setlist, so we knew which main tracks we wanted to work with, and then it was [about] which songs fit [with them]. It was really natural to make a setlist.

“We were very attached to both Korean and English texts and sat with translations everywhere. They are very powerful, the images and their texts, so I don’t think you can disconnect from them. It naturally feeds it.”

Each participant also has her own solo performance on the “Born Pink” tour. Was it difficult to ensure that they were connected to the show, but at the same time were unique to them as individuals?

“Personally, I’ve never had this on a show before, so it was new. But I think it worked very well, since you have time to be one-on-one with each participant. We take a little break between them and prepare the ground for the next one, so it’s not a blank slate, and the way it’s laid out in the setlist works very well for inputs and outputs. I think the reaction you get between each performance makes you say, ‘Well, what’s next, who’s next?’ [and makes it] a super exciting part of the show because you have no idea what’s around the corner.”

Were there any specific songs or fragments that were difficult for you to work on?

“No, to be honest. I think it was difficult to take all the music and put it in the time we had. You can do a million things with them, and choosing one submission form is really difficult. We could do a BLACKPINK rock opera that lasts six hours because we could include so many things.”

Did you pay attention to the reaction of the fans?

“I really like Pancakes. Personally, you add small elements to the show that you don’t think anyone will notice, but Blinky doesn’t miss anything. It’s really nice to see that every aspect of the show is liked, and how much they care about BLACKPINK, how much they enjoy the time they spend with BLACKPINK.

“This is one thing that I noticed specifically in K-pop, more time is devoted to communicating with my audience, and I think that’s such a wonderful part of it, such a two-way relationship. That’s what I really enjoyed experiencing when I joined k-pop.”

After you went on the “Born Pink” tour after working with so many famous artists in the West, has your experience changed much?

“I think a lot of people in the West view K-pop as an incredibly polished, well-oiled machine. But one of the things I really liked is how different it can be [from this idea]. There is such a value of fans, such a value of tours, this is a real opportunity to go out there and spend time with your audience.

“For me, one difference that I really liked was working with a female production team. I have never met a female director of light in the West, never. And suddenly I’m sitting at the negotiating table, and all the women are there. As a woman in this industry, I lived my fantasy. They are incredible. They’re so hardworking. That’s where I think the meticulousness that we all associate with K-pop comes from. How much they genuinely care, live and breathe and want to create something truly magical is really inspiring. I just love every second.”

Apart from BLACKPINK and their music, did the band have any other sources of inspiration for the tour?

“Girls have so many different sources of inspiration, obviously fashion is a huge source of inspiration. They are so common in fashion that it is impossible to get away from them. I can’t single out specific things. I think their own message and their characters are what we drew inspiration from. Who BLACKPINK are, as we saw them, was one of the biggest things we wanted to take out of the show.”

Is there anything special that fans can expect from the upcoming “Born Pink” show in London?

“The London show is of great importance to me personally, because I live in London. It will be incredible to see them in this hall, I mean, it’s huge, it’s iconic. As for the show, we have not changed anything to make it suitable for each territory. But for me, London is going to be a really special show and I just can’t wait to show everyone here who worked on it, you know, everything they worked on.”

Do you have a favorite BLACKPINK song that you listen to at a concert?

“It’s always changing. I think one day we had a “Tally” stuck in our head like crazy. And then there’s always something else you don’t know about that gets stuck in you like ‘Pretty Savage’ always gets stuck in my head by the end.”

“Although I will say this as a BLACKPINK fan, when I first saw ‘DDU-DU DDU-DU’ on stage, I thought: “Okay, this is unbelievable.” How You Like That”becomes your favorite, and the next day it changes again”.

BLACKPINK will perform at The O2 in London on Wednesday (November 30) and Thursday (December 1) and will continue the “Born Pink” tour in Europe, Asia and Australia until June 2023.

Riddle’s greatest trick was to get a good match out of...