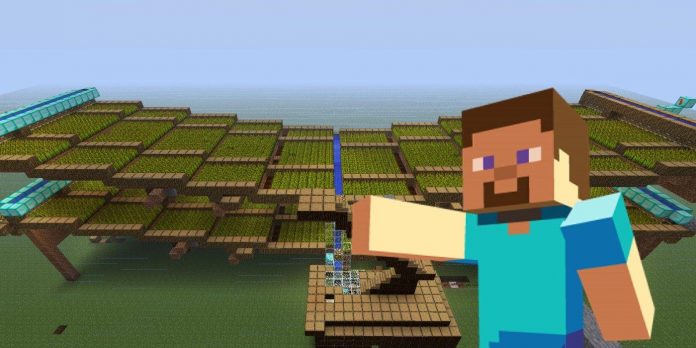 Minecraft Redstone mechanics allows players to create automated farms, but abandoning this useful feature can make Minecraft more interesting. Creating complex redstone contraptions is a complex process, but once completed, these automated farms allow players to acquire resources without lifting a finger. These farms are convenient, but they can deprive players of the motivation to mine minerals, which makes some of the basic game mechanics of Minecraft obsolete.

Essentially, Redstone allows players to create machines in Minecraft. As wiring, Redstone dust is connected to components such as pistons, observers and dispensers to perform automated processes. These components allow players to create machines that can automatically shear sheep, kill vines, harvest crops, and more. Although these machines are difficult to build, they can be worth the effort to players in the challenging but exciting Minecraft survival mode.

Related: How to Get Back into Minecraft If You Haven’t Played for Ten Years

However, some automated farms can make mining and exploration, two of Minecraft’s best gaming features, seem pointless. With the help of Minecraft villagers, players can use automated pumpkin and melon farms to acquire maximum armor without leaving their base. With high-level gunsmiths selling diamond armor and iron farms providing endless access to useful ore, players have no reason to explore the magnificent caves of Minecraft. Automated farms can be useful, and their clever design demonstrates the creativity and ingenuity of Minecraft players. But unfortunately, their convenience can end up making Minecraft boring. Thanks to the enhanced armor protection, most of the complexity of the game is removed, and without the need to collect resources, players have practically nothing to do except to engage in construction.

In some cases, automatic farms (even as complex as those of Redditor netosque99) do not make Minecraft any less interesting. For example, using automatic farms to obtain resources for large buildings reduces frustration by allowing players surviving in survival mode to create massive Minecraft buildings without spending hours collecting materials. For players in a multiplayer survival game, automated farms can help build bases and gather enough resources for dozens of players. On faction servers, where conflicts often occur, automated farms can help players participate in battles more often, without taking long breaks to replace lost equipment. While automated farms can improve the Minecraft experience if used conservatively, if overused they can do more harm than good.

The decision on whether to build automated farms is made by each individual player and depends on his situation, playing style and skills. Some types of automated farms can be very useful without interfering with the enjoyment of the game, and some players find the process of creating different types of farms in Minecraft quite interesting in itself. However, for those who think Minecraft isn’t complicated enough, it’s best to avoid this useful feature.

Fear The Walking Dead: What fans suspect about the new spin-off...

The Batman: Matt Reeves Justifies The Choice Of Robert Pattinson And...