Home Celebrity Aaron Rodgers did not attend the wedding of Jojo Fletcher and Jordan... 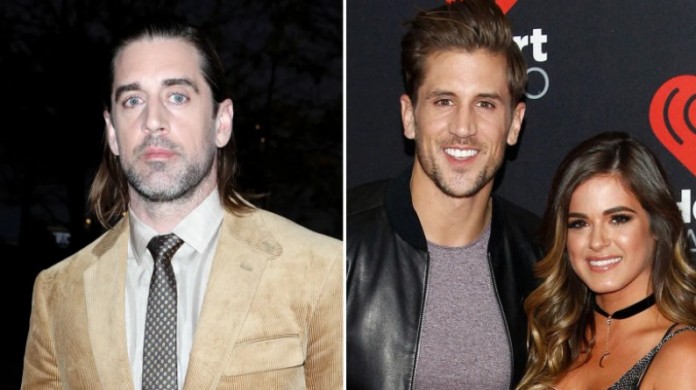 “There is still a rift in the family,” the insider says, noting that the brothers have not “reconciled” and have not “adjusted their relationship.”

Earlier this month, we confirmed that Jordan, 33, and Fletcher, 31, exchanged vows at the Sunstone Winery in Santa Ynez, California, on Saturday, May 14.

“This is a sad situation for the family and especially for Jordan, who really loves his brother,” the source continues. “Aaron missed his big day, and that’s something Jordan will never forget. Jordan invited his whole family, including Aaron, even knowing that he probably won’t come, since they have been away for a long time.”

Bachelor Nation and NFL fans found out about the Rogers family feud when Jordan participated in the 12th season of “The Bachelorette” in 2016. When Fletcher arrived for a date in her hometown, the former Vanderbilt quarterback informed her that Aaron would not be joining them.

“I have a great relationship with my brother Luke. Aaron and I don’t really have that much of a relationship,” Jordan said at the time on the ABC show. “He just chose this lifestyle, and I preferred to stay close to my family, parents and brother. … It’s not perfect, and I love him, and I can’t imagine what it would be like to be in his place and have the pressure that he has, the demands from the people that he has. Don’t take offense at him, it’s just the way things are right now.”

When asked about his remarks, Aaron told reporters that he had not watched The Bachelorette Party. “[It’s] a little inappropriate for Jordan to talk publicly about some family matters, so I’m just… I’m not going to talk about it,” he said. “But I wish him good luck in the competition.”

After Jordan and Fletcher got engaged in the 2016 finals, he told The Hollywood Reporter he hoped the Green Bay Packers quarterback would attend.

“There is no scenario in which I would not want my whole family to be at the wedding,” he said at the time. “This is what our whole family wants and hopes for, and at some point it will be a good wedding. There will be a lot of people there.”

Fletcher, for her part, has said little about the situation in recent years. However, in 2017, she told us, “I love Jordan, I love his family, and I really think these topics should now be discussed in the family. So I really tried to respect that. But he has a wonderful family. They love us so much and support us so much in everything. So, I mean, I love his family.”

More recently, Aaron and Jordan’s father, Ed Rogers, made a rare comment about the football star as Aaron hit the headlines for his controversial opinion on the coronavirus vaccine.

“The main thing [is] that I just support him,” Ed told USA Today, adding that “things are going well in their relationship.” “I’m proud of him. I trust his judgments and decisions. I think I would have done that.”