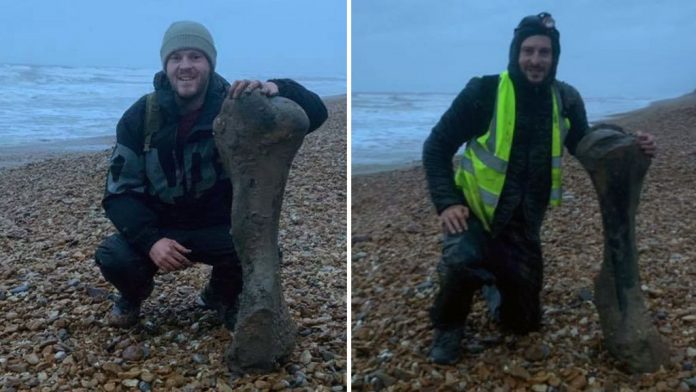 An elephant fossil dating back 125,000 years was discovered in England. Scientists think this newly discovered fossil is unique in some ways.

Two brothers living in England and interested in fossil hunting as an amateur found a fossil on the beach of Isle of Wight. While this fossil is thought to be an elephant fossil dating back 125,000 years, researchers also showed great interest in this discovery.

According to the information received, these bones, each weighing 25-30 kilograms, are likely to belong to an elephant that is 4 meters long and weighs 11-15 tons. In other words, there is a creature almost twice the weight of even the largest African elephants.

Discovering the fossil, the Ferguson brothers sent the photo of the fossil bone to the Dinosaur Island museum in Wight for experts to examine. One of the brothers, Joe Ferguson, said about the discovery they made, “Half of it came out of the sand as if it were cartoon decor. It was incredible. We didn’t even have to dig it, it came out immediately when we pulled it. It was quite exciting,” he said.

The bone found by brothers Luke and Joe Ferguson is approximately 1 meter tall. The fossil bone is presumed to have been exposed after the storm on Brighstone Beach. According to experts, the bone belonged to either spur-toothed elephants or mammoths.

Its location makes it unique

The General Director of the Dinosaur Island Museum, Dr. Martin Munt said that the fossil belonged to a biceps, and could have been from 10 thousand to 125 thousand years ago. Saying that such a bone is rarely found in these parts of the island, the scientist stated that the fossil is unique in terms of its location, even though it must have remained intact.

The Ferguson brothers stated that they wanted to keep the fossil, but would not mind having it displayed in a museum. Remains of similar animals were found on the south-east coast of the island before. Museum officials gave information to the brothers about how to protect the bone.