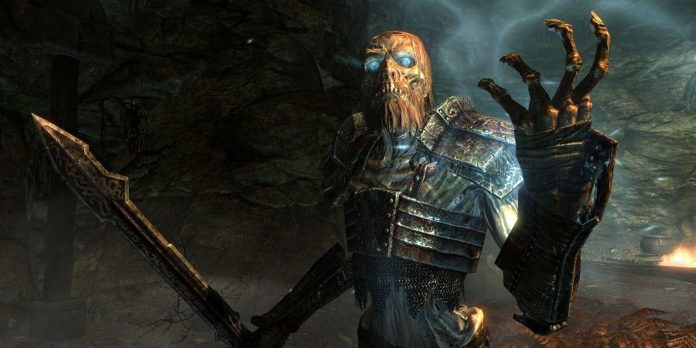 The Elder Scrolls 5: Skyrim was released during an important period in the history of video games. When Skyrim first came out, games were shipped in boxes with manuals and other charms, but today most video games are sold digitally, meaning players assemble their games without any physical packaging. The next installment of The Elder Scrolls series, The Elder Scrolls 6, which was shown in a trailer in 2018, is set to be released in the digital age, and fans are wondering if they will still receive physical gifts.

Elder Scrolls fans are understandably excited about the upcoming installment of the series after the huge success of Skyrim. However, they will have to wait longer, as The Elder Scrolls 6 is still in pre-production and will not be released anytime soon. While many people are crying out for the next installment of the series, a decade-old release continues to inspire great works of art. Now a fan on Reddit has shared an image in which they demonstrate a ring created based on Skyrim.

Reddit user printcastmetalworks shared an image of his silver ring in the Skyrim style. The original poster claims that they got the inspiration to create the ring after looting many Scandinavian tombs in the game. They called their creation “The Ring of the Draugr Champion”. According to Scandinavian folklore, draugras are undead creatures that rest in graves or palaces and often guarded treasures, and draugras in the game also have similar characteristics. The ring, created according to the original poster, depicts a draugr lying in an open casket with a sword in his hand. The creation won the love of Skyrim fans on Reddit and in just a couple of days gained hundreds of votes.

After looting so many Scandinavian tombs, I decided to make a ring. I call it the Draugr champion ring. Don’t wake him up! from skyrim

The comments section of the post was filled with comments from fans praising printcastmetalworks’ skills, while some commenters asked questions about the artwork. Some fans wondered how long it took to develop this creation and what procedures the creator performed, while others wondered if they could buy it. The original poster said that it took a week to make the model and another three days to make it in silver. And printcastmetalworks also stated that Skyrim fans can buy their creation in their store and on the Etsy website.

Despite the fact that more than ten years have passed since its release, The Elder Scrolls 5: Skyrim has retained its popularity among gamers. Skyrim is one of the games in the Elder Scrolls series with the highest rating according to Metacritic, it has sold more than 20 million copies, and it still tops the Steam sales chart.

The Elder Scrolls 5: Skyrim has already been released for PC, PS4, PS5, Switch, Xbox One and Xbox Series X|S.

Elden Ring Is Already Gold And Celebrates It With New Playable...