Home Entertainment A scammer does not dream of a rabbit girl senpai: Shoko, explanation 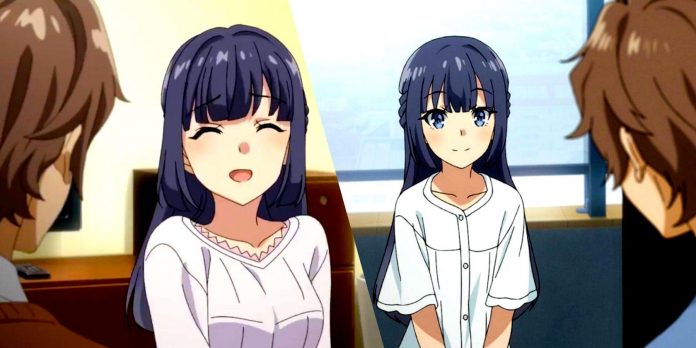 Many aspects of Rascal Does Not Dream of Bunny Girl Senpai have perplexed viewers, but the concept of Shoko Makinohara is unquestionably one of them. The stunning Shoko first appears as an older high school student, then as a much younger girl before returning to her senpai role.

Many fans wonder if the ‘Shokos’ are the same girl, as both young ladies possess identical names and uncannily similar appearances, or if the older one is just a fabrication of Sakuta Azusagawa’s mind, as Futaba suggests. Season 1’s ending left more questions to unpack than answers, as fans are left to determine for themselves the true nature of Shoko’s existence.

The stunning Shoko first appeared to Sakuta on Shichigahara Beach wearing a Minegahara High school uniform, ready to comfort the distraught stranger in his time of need. Sakuta’s sister, Kaede, has been hospitalized due to a violent case of Puberty Syndrome, and his world was simply falling apart. For some reason, he opens up to Shoko, revealing the deepest fears in his heart to a complete stranger, and receives the most comforting and encouraging words as a result.

After being calmed down off the edge of despair, Sakuta manages to pull himself together and take charge of the situation by raising his little sister when it becomes apparent that his parents no longer can. During that time, Sakuta had become withdrawn and did not have many friends to support him, but the memory of the dazzlingly beautiful and kind Shoko gets him through his darkest days, and the youngster never lost hope of being reunited with Shoko once again.

Having lost all contact with the young lady, Sakuta decides to enroll at Minegahara High school, seeing that Shoko was expected to be attending that institution. However, the brave boy found no traces of Shoko, in the past or present students’ records. Nobody, besides Sakuta, has ever seen Shoko as far as anyone can tell, but then again the same could be said for Mai Sakurajima when she became invisible to the world…

Viewers (and everyone else) get to see a lot more of young Shoko than her older counterpart after Mai and Sakuta bump into the sweet middle school girl attempting to save an abandoned kitten. Having no place to raise it, Sakuta offers to take the feline in, allowing the youngster to visit Hayate whenever she is able. Shoko seems to have no clue that another person is walking around with her same name, and claims to have no direct female relatives of a high schooler’s age.

As it stands, there appears to be no connection between the two Shokos, besides their relationship with Sakuta (and their favourite red umbrella). She strikes up a quick friendship with Kaede and the other girls who frequent Sakuta’s abode and appears to have the same caring, empathetic personality as the other Shoko. Unfortunately, the young girl is ill and regularly has to stay away from Sakuta’s home while she recovers, which is an important element in the Rascal Does Not Dream of a Dreaming Girl movie.

So Who Is Shoko?

The verdict is still out regarding the infamous Shoko, as the truth about her existence is left up to the fans to decide in Rascal Does Not Dream of Bunny Girl Senpai. Many fans have opted to align their beliefs with Futaba, considering that she has not been wrong yet, and have concluded that Shoko is a figment of Sakuta’s imagination and a side effect of his Puberty Syndrome. The fact that the young lady only shows up when Sakuta is overwhelmed by emotional turmoil suggests that she was created as a coping mechanism to deal with the trauma of it all.

The notes that Shoko leaves behind prove nothing really, as Sakuta could have written them himself without realizing it, which could be suggestive of Dissociative Identity Disorder. Those who suffer from DID develop alternative personalities to cope with trauma which is usually accompanied by gaps in memory and hallucinations. Maybe Shoko is literally a part of Sakuta’s consciousness, which is why she always knows exactly the right thing to say and always has the perfect timing. The notes are possibly a way of getting the two personalities to remain aware of each other, while simultaneously maintaining their individuality.

Although many viewers have speculated about the connection between Mai and Shoko, their correlation seems a bit too obvious considering they share such a striking resemblance to each another. Mai also shows signs of jealousy towards Sakuta’s relationship with this unknown girl which does not fit with this idea, nor the fact that Shoko seems to know a great deal about Kaede, even before reading her journal. Others are comforted by the idea of time travel to explain Shoko’s various visits, insinuating that the youngster is Mai and Sakuta’s daughter visiting from the future. Time travel is a predominant element in Rascal Does Not Dream of a Dreaming Girl, so maybe these guys hit the nail on the head.

RELATED: The Most Eligible Bachelor in Komi Can’t Communicate

One fan theory suggests that Shoko and Kaede are one and the same, due to the unique way that both girls talk in the third person and hold a very deep connection with the troubled young man, which is emphasized by the fact that the older Shoko only appears when Kaede is in trouble. This could be further explained when considering that Kaede gives off a strong impression that she loves Sakuta in a way that is forbidden, potentially crossing the boundaries of what is appropriate. However, as affectionate as her brother is, he clearly does not feel the same way, so to process this forbidden love, Kaede either creates or becomes an older, more attractive paramour with the ability to connect with Sakuta on another level. This theory could also justify the younger version of Shoko, whom Kaede must have met somewhere along the way and subconsciously used her as inspiration.

The young Shoko has more standing as a “real” character because, contrary to her older counterpart, the other ladies in Sakuta’s life actually met the sweet girl. Shoko regularly visited Sakuta’s home to spend time with her kitten and became fast friends with the lonely Kaede. However, considering how powerful the influence of Puberty Syndrome has on people, it could be possible that even the juvenile Shoko is projected from Sakuta’s mind. This theory may be far-fetched, but stranger things have happened in Rascal Does Not Dream of Bunny Girl Senpai.