Home Tech A Robotic Goat, This Is The New Kawasaki ‘Motorcycle’ 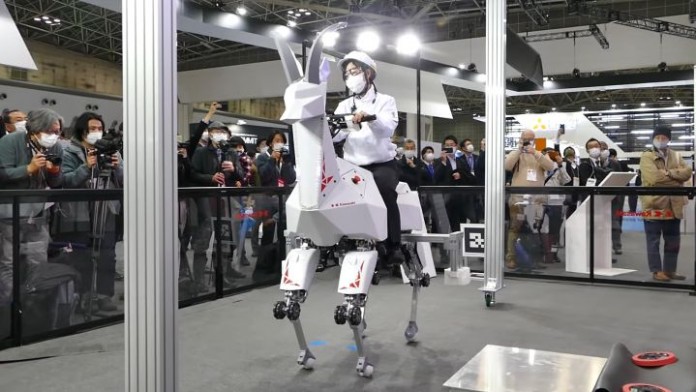 Robotic: The world of technology is changing a lot with the latest advances in the electronics sector. So much so that we have seen how batteries are the ones that supply energy to the authors of the most modern cars, and this is only the beginning. And we say this because the next step is to include robotics as Kawasaki has done with its new robotic goat called Bex.

The world of motorcycles is very wide, and if you are a lover of them, you surely know the large number of styles that exist and the different displacements that exist. Surely many already think about the greater integration of the electric versions. That may be the present, but Kawasaki is already thinking of a more interesting and curious future.

The firm is one of the most respected in the world of motorcycles and you will surely associate it with the famous large-displacement ‘Ninja’. But it seems that the Japanese firm has other plans for robotics, and it has made it known at the International Robot Exhibition (iREX) where it has shown Bex.

The truth is that it does not lose much of what it usually does, since it would point to being a one or two-seater transport. However, this time it would comply with the colloquial way of calling the motorized ‘donkey’ of more than one. But specifically we are talking about a large robot in the shape of a goat.

In this video that we present to you, you can see how it is physically, where an operator is able to get on and walk a few small steps. If we take a look at the legs of the vehicle, they surely sound familiar to you. We are talking about the Boston Dynamics Dot, although we could also take the recently arrived Xiaomi CyberDog as a reference.

It has small wheels on the knees that also allow it to maneuver in all directions, but what is most striking is its ability to move with its own feet and keeping a human on top of it, who can weigh a maximum of 90KG Of course, the steps he takes in the video are very short but safe and it will be a matter of time before he signs with the key that can combine comfort, balance and speed as we are used to.

At the moment it is a curious prototype to say the least and it will be time to follow Kawasaki closely to see how it progresses in this field.

See the January games from Xbox Games with Gold