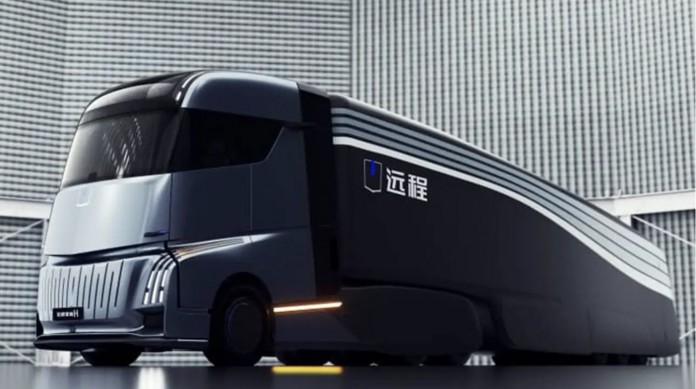 Tesla’s autonomous trucks are competing from China. The Homtruck, which has a futuristic design, will be on sale in the coming years.

Automotive manufacturer b) introduced its new generation Homtruck electric truck. Production and first deliveries are scheduled for early 2024. According to the press release, the Homtruck will go on sale in countries such as Europe, Korea, Japan and North America.

Home concept truck Homtruck is coming from China! Here are the details

Chinese automaker Geely, owner of Volvo, Lotus and other car brands, has unveiled its hybrid electric truck that provides the comfort of home, which it says will go on sale in 2024. Farizon claims the Homtruck will be one of the most advanced and cleanest commercial vehicles on the road when it launches.

The Homtruck will have two power options, Methanol Hybrid and pure electric. Batteries powered by methanol, we know that Geely has invested in for several years, and some models also use this energy. In addition, Farizon stated that Homtruck’s batteries can also be replaced, which reduces the need to wait for charging.

In terms of furnishings and design, the company says the truck was designed to meet the needs of its drivers. As the automaker noted, drivers are able to spend more time in their vehicles than at home. In addition, the vehicle with a large saloon; shower, toilet, single bed, fridge, kitchen area and a small washing machine.

Homtruck also provides autonomous driving capability. Also during long journeys, trucks can communicate with each other to maintain safe speed and distance. On the other hand, it can also use vehicle sensors to analyze traffic data in real time.

The truck, which has a futuristic design, is like Tesla cameras; Alongside 360-degree cameras, it comes with a fourth-level autopilot in SAE International scale.

Geely plans to introduce autonomous driving in three phases. By 2023, the company will have an advanced system. It hopes to have some partially driverless features with more advanced systems by 2026. By 2030, it will achieve fully autonomous driving. There are also rumors that Geely will be collaborating with Huawei to integrate HarmonyOS into its vehicles.