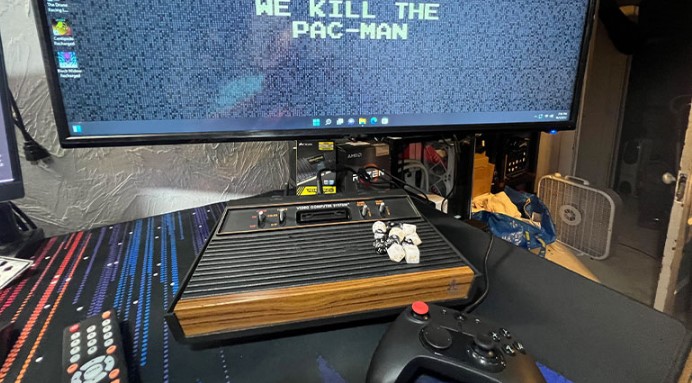 A Reddit user managed to create a tiny but powerful gaming PC by removing the internals of the Atari 2600 45-year-old gaming console. Video games have been part of the tech world for over 60 years. With the development of technology, games consisting of pixels have given way to graphics, which over the years is almost as impressive as the real world. One of the important parts of this long history is a console called the 2600, which Atari put up for sale in 1977.

Recently, a Reddit user managed to embed a small gaming computer into the Atari 2600, a 45-year-old gaming console. This little monster, which does not seem to be a gaming computer from the outside, can easily open games such as The Witcher 3 and GTA 5.

The game can be played on a 45-year-old console

Reddit user J0hnnyMeh stated in a post on Reddit that he removed the internal parts of the completely original Atari 2600 and put a powerful computer inside. Stating that the internal parts of this console, which is a historical monument, are completely unusable and beyond repair, Johnny states that he could not put a video card in the console because of its dimensions.

This mini-computer, equipped with an AMD Ryzen 5 5600G processor and an integrated Vega 7 graphics card, also has 16 GB of RAM and 1 TB Nvme SSD. J0hnny, which uses a special ASRock brand motherboard to make all the parts fit, claims that it also produces some parts on a 3D printer to fix the equipment and providing temperature control.

Of course, although it is not the most powerful gaming computer today, you can easily play games such as Witcher 3, Need for Speed Heat and GTA 5 on this computer, judging by its hardware characteristics.

F1 drivers compete in eSport competition; know how to watch

2 Redragon Headset Models For You To Discover