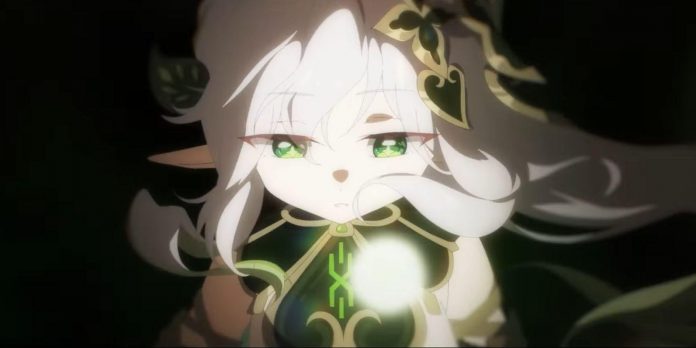 The latest Sumeru promo video from Genshin Impact, inspired by anime, has generated additional interest in the next major update. The video shows a couple of interesting scenes that include a number of new characters, including the famous Dendro Archon Nahid.

A new post in the popular Genshin Impact subreddit points to an interesting interaction between Nahida and one of the most iconic characters of the game, the registrar of the Adventurers Guild, Catherine. Reddit user H4xolotl shared a screenshot from a video in which Nahida appears to be hiding behind Katherine’s legs in her Adventurers Guild booth.

Despite the fact that the scene only shows the characters’ feet, H4xolotl managed to identify Catherine by her unique type of shoes. The reason why Nahida was hiding in Catherine’s booth has become a popular topic in the Genshin Impact community, and fans are convinced that the issue will be resolved after the release of a major new update. As the Archon of Sumeru, Nahida will play one of the most important roles in the upcoming storyline. The official history of the game has already confirmed that she is the youngest of the seven Genshin Impact archons, which is also hinted at by her child model.

Nahida hides behind Katherine in the latest Twilight clip from Genshin_Impact

Talking to Katherine allows players to collect various rewards for Genshin Impact’s daily errands, as well as send their characters on expeditions. Despite the fact that she seems to be an ordinary NPC, most of the community has always been suspicious of this mysterious character, who seems to be present at all the headquarters of the Adventurers Guild at the same time. A recent theory created by fans claims that she may be related to one of the Eleven Harbingers of Fatoui, Sandrone, due to the similarity of their appearance.

Fans claim that despite the fact that in the video she seems to be protecting Nahida, Catherine may still be a Sandron spy robot whose main job is to gather information from the main regions of Genshin Impact. Catherine even has a couple of voice cues in which there are the words “reboot” and “error”, which gives additional credibility to this theory.

When it comes to the release date of Nahida, it is expected that she will appear in Genshin Impact version 3.2, which will break the HoYoverse pattern of adding new archons to the game list one update after the arrival of a new region. According to the usual schedule of game updates, the 3.2 update should appear around the end of November. Despite the fact that most fans claimed they were disappointed with Nahida’s overall design, a recent Genshin Impact poll confirmed that she is actually the most popular future character.

The thing deserves its revival of the cult of the 80s...