Home Entertainment A new update has been released among us 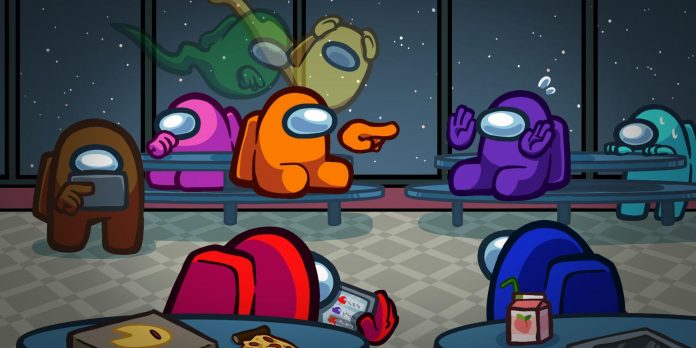 The developer “Among Us” Innersloth continues to actively support its online social deduction game, adding content after launch and updates, adding new features that improve the quality of life. In its latest developer magazine, Innersloth disassembled the latest patch Among Us, confirming the addition of the expected changes. Not only will new cosmetic space cubes “Among Us” be available for which stars and beans can be spent, the store has received some polishing, and clarity regarding official sanctions will be provided.

To begin with, Innersloth adds two new space cubes to “Among Us”, each with its own new cosmetics inspired by food. As usual, one Cosmicube will be available for Beans and one for Stars. The first one is called Snack Cosmicube and costs 2500 beans. It includes ice cream, eggs, cheese, lollipops and even a chef’s costume. Feast Cosmicube costs 110 stars and includes similar snacks, as well as a loaf of bread, a jelly mini companion and a hot dog costume, as well as other cosmetics.

The next most significant change in “Among Us” is related to the polishing of the game store window. Those who open the store will find a new “Favorites” section, which will focus on the latest cosmetic content added to the game. A new tab for buying stars has also been added to the store. The store also has new sorting options that allow players “Among Us” to sort by new items. Finally, the cosmicubes are now marked appropriately if they are time-limited, and have visual indicators indicating which cosmetics and cosmicubes have already been purchased.

Another significant change, surprising that it was not considered earlier, is related to sanctions — in-game bans and punishments. Previously, those who were blocked received a general disconnection error if they tried to join the player selection system. In the future, more detailed information about the player’s blocking will be displayed. This information will include the reason for the block, the end date of the block and a link to the Code of Conduct among us.

In addition to adding content and user interface changes, this update also fixes various bugs in “Among Us”. For example, some cosmetic items for hats were previously broken, but now they are displayed correctly. Some cosmetics also caused an in-game chat error “Among Us” if players scrolled through the logs. This has now been resolved. In total, more than a dozen bugs have been fixed in the update.

The new update for “Among Us” should improve the gameplay in general, at least in small things. Cosmetics will be a great reward for dedicated players, which they will be able to unlock during the game. As for when “Among Us” will get its next patch or the next big patch, it’s still unknown. Given Innerslot’s track record, expect news soon.

“Among Us” is now available on PC, PS4, PS5, Switch, Xbox One, Xbox Series X/S and mobile devices.

Apple Music Offer for Students: How to Get Beats Flex Headphones...

Movie Listings: All The Premiere Films This Week (March 11-13)