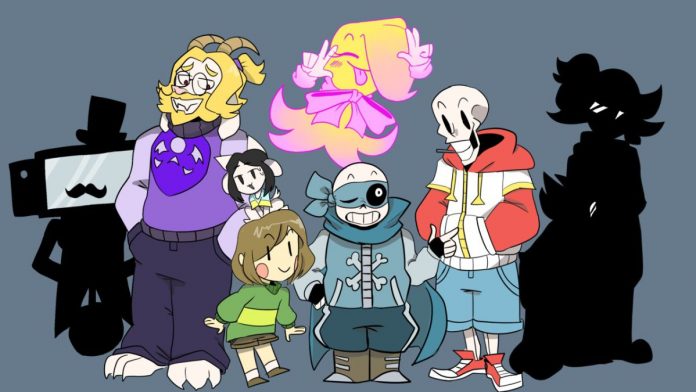 Undertale is not only a great success on the independent scene and an absolute triumph as a video game, it is also a work that has emotionally affected a large number of players thanks to its story and characters. It is not for that reason that it is surprising that a great fan movement is dragged by it that includes illustrations, music, own stories and, of course, video games that are inspired and built from the work of Toby Fox. But we are not going to be fooled, The quality of these amateur productions is very varied, with some exceptional examples and a much higher proportion of poor executions where it is noted that the passion for the game, some of its protagonists, or its mechanics, exceed the skills of those responsible, although such is the nature of any fandom many times.

This TS! Underswap, on the other hand, exudes finesse and a more balanced treatment of the original material to create an engaging plot using characters that will be familiar to us but with significant changes and an approach full of novelties that give it an original and less derivative air than other works. fans. It is also noted that it is a project with a certain degree of maturity, the result of being an evolution of the well-known project known as Underswap, in which the objective was to exchange traits and personalities between characters, giving them new designs, interactions and interests in a mixture that already It was starting to shed some really curious details that were creating their own niche of fans.

The world of fan development is ephemeral and the proportion of jobs that begin is infinitely higher than that that ends. The so-called Team Swap decided to leave Underswap to set their sights on an ambitious crossover job between Undertale and Earthbound, but that job was in turn relegated by the disappearance of its main programmer and a much more ambitious turn of the screw from Underswap, which It wasn’t just a rehash of the original story, but something with more of its own personality. That’s where this TS! Underswap was born, whose full first part is already fully playable and has been the talk of the community for a while due to the quality it treasures and how fresh it is.

The free demo can perfectly take us two hours as we walk through the area called Ruined Home and reach the gate that marks the limits of the old capital. The exchange of personalities goes far beyond changing the dialogues between the characters, being a complete rewriting with its own nuances. For example, if in the original game the key figure at the beginning was Toriel, here the one who guides us in the underground world of monsters is Asgore and his dialogues and interactions are different but follow the general pattern of development of Undertale, although so changed that we will feel it as something fresh that will awaken our curiosity about this version of the Fox universe and its characters.

It also impresses with technical details and additions. The team has borrowed some ideas from Deltarune, particularly the inventory system and direct obstacle navigation challenges in the world itself. There are numerous visual additions, new monsters, all-new locations, new pieces of music true to the style of the original, a combat design that exudes experience, and an overall topcoat that really impresses. The peculiarities of Undertale in terms of progression, combat and its relationship with the development of the protagonist remain, so those who already know him know what to expect and can get an idea of ​​the consequences of their actions (of course, We recommend having played the original game before trying TS! Underswap, it would make little sense not to).

Familiar … but different (and in Spanish)

The last demo, 1.08, gives us a glimpse of the outside once we pass Ruined Home, a new area where wintry Snowden gives way to summery Starlight Isles. The graphic finish of it and the setting are really striking and the team seems to have some very interesting ideas to create dynamic puzzles based on movement and inertia, using new mechanics such as springboards that will give dynamism to the development. The original idea was to pause development after finishing the first zone and going through the gate, but the response from the community has been so enthusiastic that it has given the team wings to actively follow development and take advantage of the pull to see how. they can go far.

As they themselves make clear in their FAQ, this is a free work carried out by a team of young adults in their free time as they address their lives, jobs and personal difficulties, so in no case do they guarantee that the project will be completed. It is a very ambitious work with a lot of own production in various sections, made out of pure love of art, so there is no guarantee that it will come to fruition, but it is clearly one of the most promising fan work around Undertale that has been seen. and what is already there is significant and worth exploring. Thanks also to the work of the community, the demos are translated into different languages, including Spanish, so any fan of Fox’s work can jump into exploring this particular interpretation and putting this promising work on the map.

Pokémon Unite: How to Download for Free On Nintendo Switch; Now...