Home Entertainment A Minecraft fan has created a contraption that plays a tune from... 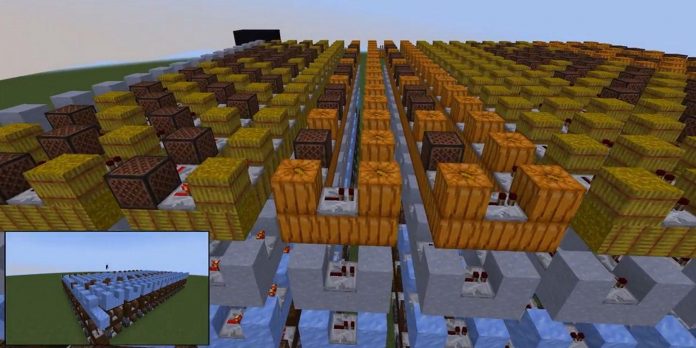 Minecraft’s longevity will go down in the annals of gaming history thanks to its almost endless replayability and vast landscape that just screams of potential. Despite its age, originally released in 2009, Minecraft is still one of the most popular video games of 2022, and for good reason. Millions continue to create so many fantastic projects, and while a lot of it is pleasing to the eye, sometimes people do things that are also pleasing to the ear.

Recently, Reddit user Mertuch demonstrated his construction and orchestral skills in Minecraft, creating a rather complex-looking music system. The video posted in the topic shows that when activated, the red stone-based device plays a very familiar melody. For many fans of the GTA series, it will become obvious that the user managed to recreate the melody of the San Andreas theme using a mixture of note blocks, hay bales and some pumpkins. Although it is not a high quality original, it is a very accurate facsimile and an impressive creation overall.

Anyone who has ever played one of the Rockstar games knows that Grand Theft Auto is famous for its soundtrack, and many radio stations play everything from heavy metal to hip-hop and soul. Although Mertuch makes it clear in the title of the theme that their performance is taken from San Andreas, there is no doubt that many will recognize the melody, even if they are not told what it is. What is actually a nice touch to the video they posted is that they can be seen standing on a platform next to a huge device, hitting a ball like a conductor leading an orchestra.

Thanks to the inclusion of musical blocks that were added to the game back in 2011, fans got the opportunity to create all sorts of interesting musical interludes and projects. For example, another player used blocks to recreate the classic “Flight of Bumblebees” in Minecraft.

Even with a vanilla soundtrack, music is an integral part of the game. In fact, probably because of its calm melodies, some consider Minecraft to be one of the most relaxing games. After all these years, it’s still one of the most successful games to be released, and thanks to a dedicated and creative community dealing with all sorts of interesting ideas, Mojang’s open-world intellectual property life is likely to continue for a long time.

Where does Cisco go at the end of “Lincoln Lawyer”?