Home Entertainment A look back at some of the greatest stories of the eighth... 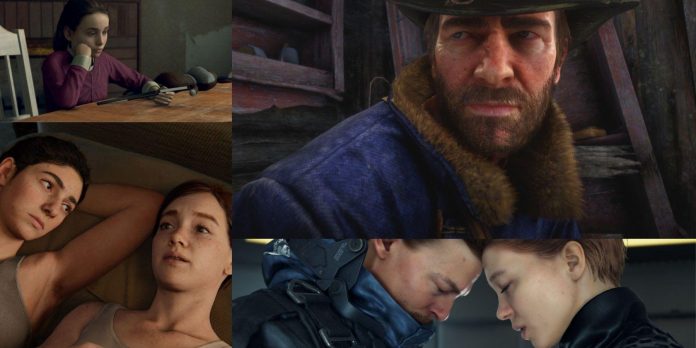 Video games can test reflexes, raise adrenaline, offer up a challenge, and provide a way for friends to have fun. However, video games have also shown themselves to be quite proficient at delivering stories, and with each gaming generation, the medium has been getting better at it. With the eighth generation of gaming, which includes the PlayStation 4 and the Xbox One, gamers got to enjoy a plethora of games that pushed the medium forward in all aspects, especially in terms of storytelling.

Although there were many gaming advancements in the eighth generation, it will likely be the stories it provided that it will be remembered for. From games like God of War that explored the relationship between father and son, to eccentric mind-benders like Control, there was something in every genre for all gamers to enjoy. Gamers can only hope that the current gaming generation will bring as many great stories.

RELATED: God of War Ragnarok is Less Than 100 Days From Launch

Since their rudimentary beginnings in the 1950s, video games have rapidly morphed from mere tools of amusement to complex art forms capable of telling compelling narratives. The eighth generation of gaming further advanced the medium by utilizing modern technology to enhance realism and consequently deliver more gripping and believable stories. This has been enabled, for example, by improved graphics and motion capture technology that have helped create more realistic character models capable of conveying convincing emotions.

This was seen, for instance, with Naughty Dog’s The Last of Us 2 which features plenty of close-ups that allow facial expressions to convey a breadth of information about characters and their reactions to situations. Oftentimes, words are not needed, because facial expressions are rendered with enough clarity for players to easily read each scene. The game grapples with complicated themes such as revenge, trauma, and justice, and the performances of the characters are integral to properly conveying the story.

The environmental design also forwarded the medium and its capacity to tell stories. This reached a pinnacle in 2016’s The Last Guardian where dialogue takes a backseat, and the interesting environments one traverses share a wealth of information about a mysterious world. The game centers on a young boy and a colossal, birdlike beast he befriends. However, as one explores the dilapidated buildings with their austere architecture, they discover secrets about the people who live in this strange land, and how they have reacted to the birdlike beasts.

Life Through the Lens of Video Games

Through video games, creators have been able to make commentary on society and various human experiences, allowing gamers to understand more about their fellow gamers and the world around them. This is the case with Hellblade: Senua’s Sacrifice, which was developed by Ninja Theory and released in 2017. The game features a woman named Senua who goes on a journey to rescue her dead lover’s soul. She is plagued by voices of Furies in her head, and she sees the world differently, which can be quite frightening for her at times. However, it never stops her from achieving her goals. Many of Senua’s experiences resemble psychosis, and the developers went to great lengths to ensure accuracy. Consequently, by cleverly stimulating the senses, the game weaves a story that both educates and entertains.

A Plague Tale: Innocence put a magnifying glass on the nature of sibling relationships, revealing both the good and bad. When a terrible rat plague hits and the Inquisition arrives, Amicia has to flee with her younger brother, Hugo. Though she tries her best to protect him, she sometimes gets things wrong, and this causes complications in their relationships. The eighth generation also brought the Life is Strange series. The first game, released in 2015, centered on a student named Max who discovers she has the power to turn back time. Though she attempts to use it to help her friends, things do not always wind up going the way she intends them to. The game deals with heavy themes such as grief and suicide, though the topics were dealt with sensitively enough for the series to gather a cult following.

The Many Philosophical Questions Raised

Numerous titles from the eighth generation attempt to evoke powerful emotions and say poignant things about human life. Much like literature, video games are grappling with philosophical questions, moral conundrums, and attempting to untangle the human condition. One of the bestselling titles of the last generation was Red Dead Redemption 2, a game that frustrated several players due to its slow-paced gameplay. However, if one is willing to immerse themselves in Arthur Morgan’s cowboy life, they will find a complex story that interrogates morality and mortality, and how humans cope with both.

The eighth generation also brought Hideo Kojima’s Death Stranding which, although eccentric, managed to highlight the importance of human connections. The game was released in 2019, and it seemed to come at just the right time, as much of the world would soon find themselves struggling with isolation and loneliness when the COVID-19 pandemic hit. Quantic Dream also released Detroit: Become Human, which imagined sapient androids living alongside humans, and in doing so, the game questions the basis of personhood. Though gamers are divided on whether the game succeeded in what it attempted to do, the ideas contained are thought-provoking.

There are plenty more games that told compelling stories, though they might not have received the attention that AAA games received. This includes titles such as What Remains of Edith Finch and The Suicide of Rachel Foster. Nevertheless, they played an important role in proving that video games can go beyond entertainment, and they are also capable of telling stories that change people’s lives. With a new generation brings a new wave of games, and they have a high bar to beat if they wish to surpass their predecessors.