Home Entertainment A longtime GTA Online player has reached Level 500 by stroking a... 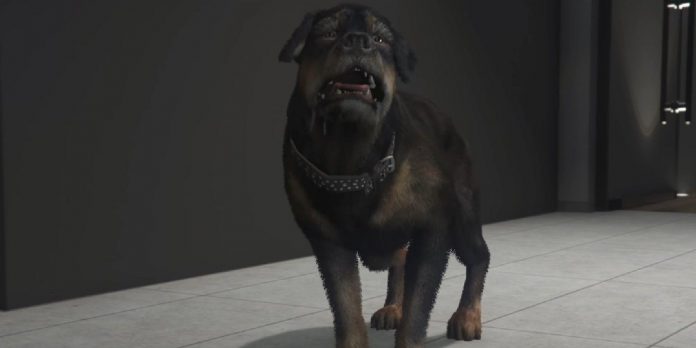 Since Grand Theft Auto Online was released on PS4 and Xbox One, countless players have been leveling up by completing missions, participating in weekly and seasonal events, winning street races, and more. One player in Grand Theft Auto Online decided that his ideal way to reach level 500 after years of grinding was to pet Franklin’s dog, Chop.

Reddit user Falloutfan4ever recently posted a clip about his experience in GTA Online, in which the player is at the headquarters of F. Clinton and Partner, turning the corner into Franklin’s office. Franklin and his dog were added to Grand Theft Auto Online as DLC along with The Contract, which also brought famous rapper Dr. Dre into the game with tons of new content included in the expansion. Although a Contract supplement is required to pet a famous GTA 5 puppy, some other players could level up using the same method as Falloutfan4ever to reach level 500.

The Falloutfan4ever video for GTA Online begins with the player entering Franklin’s office and immediately heading to the Chop, who is resting in front of a bag of golf clubs in the corner at the table. Chop has to wait for Grand Theft Auto Online players to pat him, and when they do, they will get 800 reputation points, which was enough to take Falloutfan4ever to a new level. After Falloutfan4ever caresses Chop under the chin, these points increase and eventually lead to a pop-up window on the GTA Online rank increase screen, which additionally notifies the player of their achievement.

Reach LVL 500 in the right way from gtaonline

Since Falloutfan4ever would already have access to everything hidden behind GTA Online’s 500-level reputation, their clip became more of a guideline for a long-time player who refrained from petting Chop until he was close enough. In addition to gaining the title of Kingpin as a result of exceeding level 500, the player’s level will also be shown to others with a silver globe behind him, rather than a bronze one in front of him, which represents levels 100-499, or blue, which covers all GTA Online players. which are just beginning. GTA Online players who are still committed to upgrading their globe will be able to unlock the Golden Globe at level 750, which is currently the highest level.

According to Falloutfan4ever, a significant portion of their reputation was earned by selling the CEO’s special cargo between their other actions, as it rewards significant RP, for example when GTA Online offers double RP. While many GTA Online fans took advantage of the Falloutfan4ever video to express their enthusiasm for their style of securing an impressive achievement, others talked about memorable ways to level up. One Grand Theft Auto Online player claimed to have reached level 300 by riding a tractor, and another reached level 100 by accidentally punching someone, while several complained that they didn’t level up by stroking Chop like Falloutfan4ever.

Protected: Chan from TO1 will miss the stop of the KCON...